Last Friday, the tariff war started in earnest: the U.S. imposed $34 billion worth of tariffs on China and, in response, China said it applied its own tariffs on U.S. goods.

A ship laden with U.S. soybeans raced to arrive at its port of destination in northern China before the deadline, but it got there too late. Because the shipment reached Dalian hours after the deadline, the soybeans were subject to a 25% tariff. Other U.S.-made products subject to tariffs include agricultural products such as beef and pork, cars and “aquatic products” such as lobsters.

The market, buoyed by a strong jobs report here in the United States and a disbelief that the tariff war will last, took this first salvo in stride.

This does not mean that the market will continue to ignore these issues if the dispute goes on for a while. It’s one more unknown thrown into the always difficult and pitfall-rich investment process. The list of possible negatives is long, as is the list of businesses and sectors potentially impacted by the uncertainties and potential disruptions to the supply chain.

But so far the market is largely ignoring the threats from all these issues.

One obvious reason is valuation: trading at 17.2 times next year’s estimates, stocks are not too expensive. And investors flock to stocks because of the strong potential for higher dividends and because the companies, suddenly more cash-rich because of the corporate tax cuts, are likely to buy back more shares, supporting these market valuations.

Not to be ignored, the economy is strong, too. Despite this being the tenth year of economic expansion (the Great Recession was officially over in June of 2009), the economy is booming. And inflationary threats are receding, for now, at least.

Just look at the latest jobs reports from the U.S. Labor Department.

On Friday, July 6 — the same Friday when the tariff war with China became a reality — we learned that June nonfarm payrolls increased by 213,000 (more than the forecast), and that the job market in the prior two months was stronger than was reported earlier (payrolls for May and April were revised higher by 37,000 jobs).

Still, the path ahead is full of potential problems.

The Yield Curve
While this is not reflected in the major indices’ performance, we have been seeing warning signs from the yield curve. Already quite flat, it has continued to flatten: on Thursday, June 5, the gap between 2-year and 10-year Treasuries fell to under 28 basis points — the lowest since 2007, according to Bloomberg.

A flatter yield curve, by itself, isn’t really a problem. But it signals an unwillingness to lend money to the government for longer periods — not a sign of optimism. Further, market watchers track the yield curve because when it gets flat or inverted, it often signals a recession is near.

Plus, new tariffs can impact the profitability for many major companies. This will also make forecasting — and, by extension, investing — more complicated.

What’s Working Right Now
Domestically-oriented companies, however, are likely to be resilient to trade war-related market volatility. Because they derive their revenues in the United States, their future profits are going to be minimally, if at all, impacted by any tariffs.

This explains the strength in small-cap companies — those are generally less exposed to foreign markets. And this explains the recent recovery we’ve seen in such sectors as the utilities and real estate investment trusts (REITs). 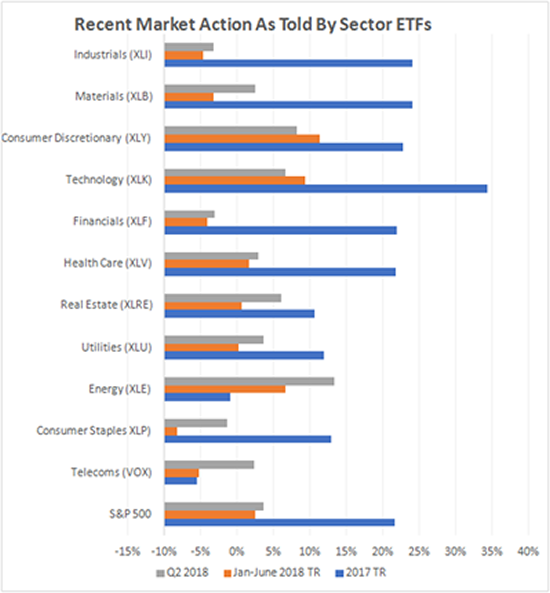 With the market having been strong, telecom, for instance, was the only sector to decline both in 2017 and in the first part of this year. However, these same stocks have recently executed a turnaround, rising 2.4% in the second quarter of this year.

Utilities, a largely domestic sector, have generally been quite weak in the context of the strong market: up 12% in 2017 (not bad, but only about a half of the S&P 500’s 21.7% return). The sector gave ground in the first quarter of 2018, but utilities as a group rallied together with the overall market the past three months: 3.7% vs 3.6% in total return, respectively.

Similarly, the real estate sector — which includes most REITs and is also largely domestic — was relatively weak in 2017 but rallied this past quarter, to the tune of 6.1% in total return.

These are the higher-yield sectors, which spells good news for income investors.

Income portfolios, such as ours at Daily Paycheck, are quite defensive, and I plan to continue building up the defenses over the coming weeks. But even if the market does decline, our strategy of reinvesting dividends should help position the portfolios for the future: a dividend reinvested at a lower price buys more shares of a stock, and that larger position will generate higher income, too.

Dividend ‘Paychecks’ That Grow Year After Year…
Before starting The Daily Paycheck, many of us were anxious about creating a portfolio that could support people after retirement. But there is nothing like the test of time. We’ve now spent more than six years using The Daily Paycheck strategy, and we love its simplicity. Our subscribers do, too.

A large number of them have been with us since the launch of The Daily Paycheck back in December 2009. They watched as we slowly transformed the $200,000 model portfolio into the $380,000-plus portfolio it is today.

We’re no longer anxious about retirement, and you don’t have to be either. Our portfolio generates more and more income every month. And when retirement comes, people can just flick off the dividend reinvestment switch and start living off the income.

New subscribers are now greeted with a portfolio of more than 50 securities.

Our dividends get reinvested every month without having to lift a finger. Overall, the portfolio has been roughly 37% less volatile than the overall market. That represents 37% more sleep-filled nights for subscribers.

If you’d like to learn more about The Daily Paycheck system and join us for the ride, click here.

Genia Turanova, Chief Investment Strategist for Game-Changing Stocks and Fast-Track Millionaire, is a financial writer and money manager whose experience includes serving for more than a decade as a portfolio manager and Investment Committee member for a New York-based money management firm.  Genia also researched, wrote and managed recommendations for several investment advisories. From 2011 to 2016, she served as Editor of the award-winning Leeb Income Performance newsletter. Genia also wrote for The Complete Investor, another award winner, from 2003 to 2016. During that time, Genia was responsible for several portfolios, including the "Income/Value" portfolio and the "FastTrack" portfolio. Genia's academic credentials include an MBA in Finance and Investments from the Zicklin School of Business, Baruch College in New York City. Genia is a CFA Charterholder.