What The Hell Is Going On With Turkey?!?

I want to take a moment to explain a bit of what’s behind the Turkey crisis that’s grabbing headlines and rattling global markets.

For most, the Turkish currency/economic crisis probably seems like it came out of left field, but the country has actually been digging this hole for years with its extreme fiscal and monetary stimuli, and a government wanting totalitarian authority.

The culmination of several recent events has exacerbated these existing trends, leading to the type of extreme parabolic chart you see below, which shows how many Turkish lira can be bought with $1. 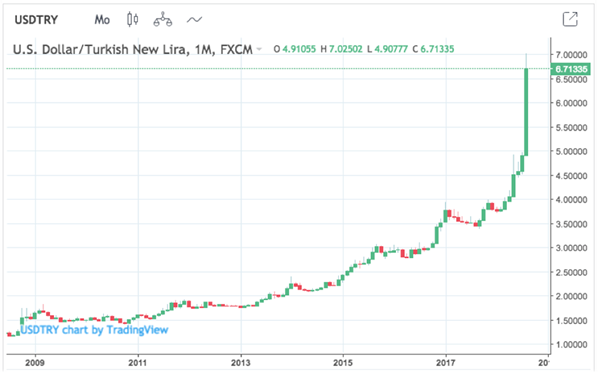 But jokes aside, Turkey is literally experiencing a perfect storm of currency pain that’s eerily reminiscent of the hyperinflation Zimbabwe saw in 2008 when its authoritarian government decided to eschew warnings and print gobs of money to pay its debts.

Part of the reason these issues have come as such a surprise to many is because, in recent years, Turkey has been in the midst of an economic boom. The emerging-market country has had one of the fastest-growing economies in the world, fueled by all kinds of debt — mainly foreign currency investments (some of which is in U.S. dollars). In other words, countries were coming into Turkey, converting their money into Turkish lira and investing in all sorts of ventures from real estate to business and infrastructure.

(The Chinese and many others do this here in America and around the globe.)

As Turkey continued to grow at rates that would make China and India jealous, its private companies borrowed and borrowed — largely from foreign banks. At the same time, the Turkish government also borrowed money while continuing to keep interest rates low and racking up a deficit bigger than its reserves.

With debts piling up and inflation at 16%+ annually, foreign investors are getting spooked and selling all their lira and lira-denominated investments at a quick pace, exasperating the issue.

The country is now struggling to keep inflation under control and pay back debts in excess of $300 billion. Every time the country’s currency further weakens, it becomes more expensive for Turkey to pay its debts, amplifying an already dangerous growing problem. Essentially, it’s a deteriorating loop.

Turkey’s economy isn’t large enough, nor does it have the reserves and diversity to easily stop this nasty process. Making matters worse is Turkey’s authoritarian president, Recep Tayyip Erdogan, who is doing nothing to reassure investors and analysts that the situation is under control. In fact, he’s likely the reason Turkey won’t emerge from this easily.

Most recently, Erdogan has publicly cited the lira’s fall as the result of a “plot” to attack him (rather than, you know, economic fundamentals), and has referred to interest rates as “evil.” That’s unfortunate, because increasing interest rates is one of the few things Turkey can actively do to help turn things around, as it would give investors and citizens a compelling reason to put their money in Turkish banks, helping to stabilize the currency.

The government has even come out and said it has no plan to seek assistance from the International Monetary Fund. And even if it did, there’s no guarantee the IMF would actually be able to justify swooping in to save the day, since a fair amount of Turkey’s problem involves private debt (rather than just public debt).

The Trump administration is also throwing fuel on the fire. At a time when Turkey is already in turmoil, President Trump announced a plan to double steel and aluminum tariffs against the country, adding pain to the Turkish economy and its currency. While the White House’s official statement did not give a reason for Trump’s decision, many political analysts have speculated that it is intended to pressure Erdogan to release a captured American pastor.

(Like I said earlier, this crisis is the culmination of many coalescing factors, and there’s even more to the story that I haven’t covered in today’s explainer — including a failed coup, an authoritarian president who has spent nearly two decades amassing more and more power, and a bizarre approach to economic strategy. For more, I recommend these articles from The Wall Street Journal and Time.)

Why This Matters
The reason the Turkish crisis is important is because it has the potential to create instability in a tightly connected banking system, like we saw in Greece some years back. With Europe heavily exposed to the region’s woes (and European bank shares already starting to fall), many believe we will see shocks reverberate throughout the zone.

A crisis like this also triggers us to take a second look at risk within economies around the world, uncovering problems that no one had really noticed before and sometimes turning non-issues into potential problems. Perception is a big deal, and the situation in Turkey changes our optics.

For now, U.S. markets seem to be coping relatively well with the issues. But I don’t think we’re out the woods just yet.

Speculators have driven the lira way beyond where it should be trading, and that could have compounding negative effects on Turkey’s emergence from these issues.

Because the country’s leaders are stubbornly refusing to take the necessary actions to correct the myriad problems, we’re likely looking at a longer time frame before we see any resolution to this issue. That could impede bulls’ psychological well-being and lower overall market confidence.

If you’re looking for a silver lining in all this, it’s worth noting that a large portion of Turkey’s problems could be attributed to President Erdogan’s decisions regarding monetary policy, meaning that this was more of a massive “human error” as opposed to a major flaw in the banking or credit system.

I expect headline risk to remain a factor in the coming months as the media uncovers more details and related problems around the world. Look for increased volatility and a harder road higher for stocks.

On the flip side, U.S. corporate earnings have been stellar, with a large group set to report this week. So far, 381 companies (82.7% of the index’s total market capitalization) have reported earnings, which are up 25% from the same period last year on revenues that are 10.4% higher, with 80.1% of the companies beating earnings per share (EPS) estimates and 73.8% surpassing revenue estimates.

Q3 estimates have come down a bit, but are still strong at an expected 19.1% annual earnings growth — not too shabby.

Basic technicals are also bullish in the S&P 500, so, for now, my Profit Amplifier readers and I are looking good with our mostly bullish portfolio.

I also don’t see any immediate action we need to take in our portfolio. We’ve had a nice string of winners, and outside of a couple hiccups, our positions are looking great!

An Invitation To Trade With Me
While the rest of the crowd is simply buying stocks and hoping for the best, my Profit Amplifier subscribers and I have spent years “raiding” the market with our simple options trades, taking more than our fair share of gains.

I’m talking about returns of 31%, 35%, and more — all in a matter of weeks, rather than months or years. Bottom line, my stock market raiding technique is the best way to increase your returns while preserving capital and reducing risk. Of course, that’s only if it’s done correctly.