It’s no secret that Warren Buffett is an incredible investor. Arguably the greatest of all-time. His track record speaks for itself — 20.5% compound annual gains from 1965 through 2018. That’s more than double S&P 500’s 9.7% annual return over the same time frame.

But I’m not here to talk about Buffett’s successes, or his recent shareholder letter (which you can read here.)

Instead, I want to talk about one of Buffett’s biggest failures  — and how we can take those lessons and profit. It’s the largest investment loss, in dollar terms, of his entire career.

It starts in 2007 when the Oracle of Omaha began purchasing shares of ConocoPhillips (NYSE: COP). By the end of 2007, Buffett had spent just over $1 billion.

The following year, shares of ConocoPhillips continued to climb, and Buffett continued investing. By the end of 2008, Berkshire Hathaway had invested a whopping $7 billion into the company. A bit of math shows that he paid an average price of around $85 per share. At the time, this was the largest publicly-traded investment of Buffett’s career. The stock represented almost 15% of Berkshire Hathaway’s total portfolio value.

In 2008, oil prices peaked at around $150 per barrel. But prices began to unravel in the second half of 2008, ending the year at around $53 per barrel. Falling oil prices and the beginning of the financial crisis in late 2008 sent shares of ConocoPhillips tumbling. Shares ended the year at $27.31… wiping billions from Berkshire Hathaway’s net worth. 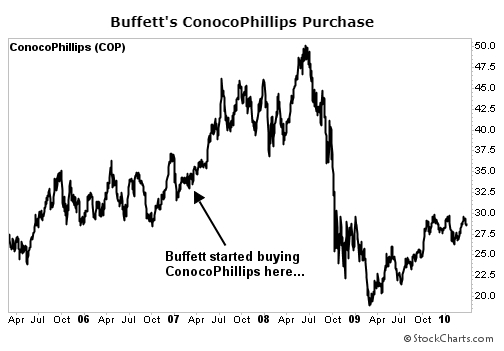 ​In Buffett’s 2008 shareholder letter, he started out with “During 2008 I did some dumb things in investments.” He explained that he “made a major mistake of commission (and maybe more; this one sticks out). Without urging from Charlie or anyone else, I bought a large amount of ConocoPhillips stock when oil and gas prices were near their peak. I in no way anticipated the dramatic fall in energy prices that occurred in the last half of the year. I still believe the odds are good that oil sells far higher in the future than the current $40-$50 price. But so far I have been dead wrong. Even if prices should rise, moreover, the terrible timing of my purchase has cost Berkshire several billion dollars.”

Unfortunately for Buffett and Berkshire Hathaway, his timing wasn’t spectacular. But his purchase — and continual investment — into ConocoPhillips is a great lesson in investing. Especially when it comes to investing in the commodity space.

The Lessons From Buffett’s Mistakes
Granted, hindsight is always 20/20, but Buffett ignored many of his own investing principles with this purchase. In fact, the very same year (2007) he began purchasing shares of ConocoPhillips, he outlined his principles in his shareholder letter…

“Charlie and I look for companies that have a) a business we understand; b) favorable long-term economics; c) able and trustworthy management; and d) a sensible price tag… A truly great business must have an enduring “moat” that protects excellent returns on invested capital.”

Buffett also talked about how he doesn’t like companies that require massive amounts of capital to continue to foster growth. The example he gave was the airline industry. “The airline industry’s demand for capital ever since that first flight has been insatiable. Investors have poured money into a bottomless pit, attracted by growth when they should have been repelled by it.”

Oil companies are notorious for spending massive amounts of capital to find and pull their assets (oil) out of the ground. From 2004 through 2008, ConocoPhillips spent a staggering $67.6 billion in capital expenditures. Roughly 8% of sales were dedicated to fostering growth. To put that into perspective, the airline company United Continental Holdings (NYSE: UAL) spends 9.8% of sales on capital expenditures.

In other words, ConocoPhillips required as much capital as Buffett’s hated airline industry to promote revenue growth — and yet, he invested anyway.

Furthermore, ConocoPhillips doesn’t exactly boast the “enduring moat” that Buffett likes to see in his investments. Sales are dictated by the cyclical price of oil, so it doesn’t enjoy any cost advantage over its peers. The competition to discover and develop large-scale oil reserves is fierce.

And finally, Buffett paid a premium for the stock…

When Buffett began buying shares in 2007 they were trading for a price-to-sales premium of 29%, and about 20% more when looking at its price-to-earnings multiple compared with its historical three-year average. Not exactly “value-worthy” numbers, or as Buffett would say, not a “sensible” price.

Of course, it’s not unusual to pay more for a company that’s in growth mode. However, that wasn’t the case with ConocoPhillips. The company had only grown revenue a total of 6.6% from 2005 through 2007.

Buffett also ignored the cyclical nature of commodities. The price of oil had been steadily climbing since 1999. At this time, however, many believed that the price of oil would keep climbing because of the “Peak Oil” theory that was heavily debated and publicized. This was the idea that global oil production had peaked and would begin declining. Buffett, like many of us, believed that we were about to run out of oil.

But just as Buffett was buying ConocoPhillips in anticipation of permanently higher oil prices, U.S. oil production began to climb rapidly for the first time since the 1960s thanks to advances in technology.

In short, the commodity price cycle in oil was not “different this time.” There was no Peak Oil. There was only a temporarily high price for oil, which led to greater investments, new technology, and then vastly more supplies. And subsequently a collapse in the price of oil.

By ignoring his investing principles, Buffett, for the first time in his life lost billions on a single company.

Closing Thoughts
Now, this doesn’t mean that we should ignore oil companies and never invest in them.

But it does mean that there are some principles we need to stick to when it comes to a sector like this… You have to understand the cyclicality of the industry, you have to buy shares at a discount and you have to buy closer to the beginning of earnings growth rather than later.

Granted, this is easier said than done. But as I told my Top Stock Advisor subscribers recently, I believe we have a great setup in the energy sector, and we could see outsized returns from this industry.
We’re now at a point where energy is leading the charge in terms of earnings growth. In the fourth quarter of 2018, year-over-year earnings growth for the energy sector averaged a staggering 93.5%. Next was communication services at 22.2%. The overall market, as measured by the S&P 500, grew by 13.1%. 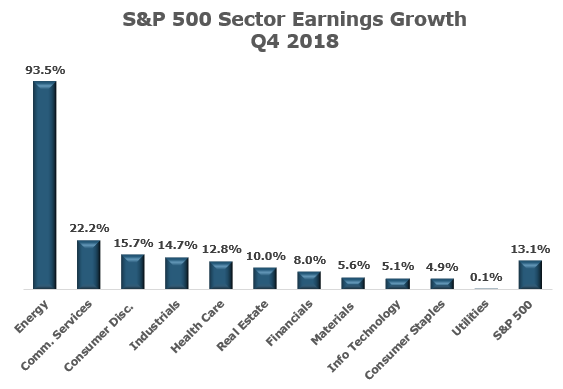 And this could just be the beginning… Unlike when Buffett bought ConocoPhilips, oil prices have been pretty depressed — yet energy companies are doing a better job than ever at remaining profitable in a low-price environment. If oil prices spike from current levels in the $50s, then it would be reasonable to expect fantastic returns from many of the stocks in this space.

As you may have guessed, my latest Top Stock Advisor pick comes from the energy sector. I think the timing is right, and with the benefit of learning from the past mistakes of Buffett and others in this industry, I think we’re looking at a setup for great returns going forward.

P.S. In a recent issue of Top Stock Advisor, I shared my latest energy stock pick with readers, along with a detailed analysis. If you’d like to get your hands on our latest pick — as well as our absolute favorite picks for 2019 — then go here right now.