13 Stocks With Plenty Of Cash

This common expression is often used when analyzing business or investment decisions. When buying real estate in a hot market, cash is king. If you come to the table with cash over more traditional financing methods, your offer will likely move to the top of the pecking order.

#-ad_banner-#Same goes for when looking at a stock. A company that produces a ton of cash or carries a good amount of cash in relation to debt is often seen as a “safer” investment compared with a company that’s debt-ridden.

And when investors believe the market is getting too hot, or expensive, they will often stockpile cash to have on hand when the next pullback hits. This way, they can pick up shares of their favorite company at a better price.

Of course, having plenty of cash is only beneficial if it isn’t dwarfed by massive amounts of debt. Taking on too much debt can be a real killer as profit is siphoned off to cover debt and interest payments. And if a company can’t keep up with those debt payments, they will have to file for bankruptcy… and even then sometimes the debts are too much to even come out of bankruptcy with a clean slate.

Just look at Toys R Us…

The company was saddled with heavy debt from when private equity firms took it private in 2005. By 2017, when it was approaching bankruptcy, it still had about $5 billion in liabilities and had to completely liquidate. Now the former toy-industry leader will become just a distant memory, joining the likes of Blockbuster and Circuit City.

As an investor, it’s prudent to pay attention to a firm’s balance sheet. Especially in today’s environment.

Record Debt Levels
We’ve gone through (and are still going through) a period with record-low interest rates. The Federal Reserve’s monetary policy has urged corporations to borrow nearly free money… and they’ve done just that. As you can see in the chart below, net debt for small-cap companies has greatly outpaced operating profits since the Fed kicked off this low-interest rate era. 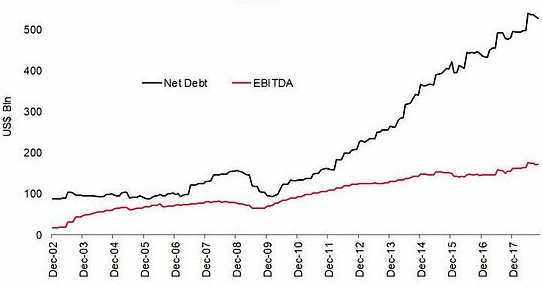 This is important to keep tabs on, because in a declining market, balance-sheet risk becomes one of the most important drivers of equity returns. Stocks that are highly leveraged (not enough cash to debt) will get hit the hardest.

Also, should the Fed return to increasing interest rates, companies saddled with debt will have higher interest payments to cover.

Let’s Hunt For Cash-Rich Stocks
It was with this in mind that I went in search of cash-rich firms. Companies that have plenty of cash to cover their liabilities. Keep in mind that every industry is different in terms of what is considered a good debt-to-capital ratio. So I screened for companies that had long-term debt-to-total capital that was below their respective industry averages.

Next, I filtered for stocks that had net-cash-to-price-per-share above 20%. I formulated this by taking a firm’s cash and cash equivalents per share less current liabilities per share dividend by market price. The higher the percentage, the more cash on hand relative to share price.

Finally, I kicked out stocks that had a share price less than $5, as well as those with average daily trading volumes below 75,000 shares. Also, I wanted stocks that had a market capitalization of more than $150 million.

I was left with only 13 stocks… 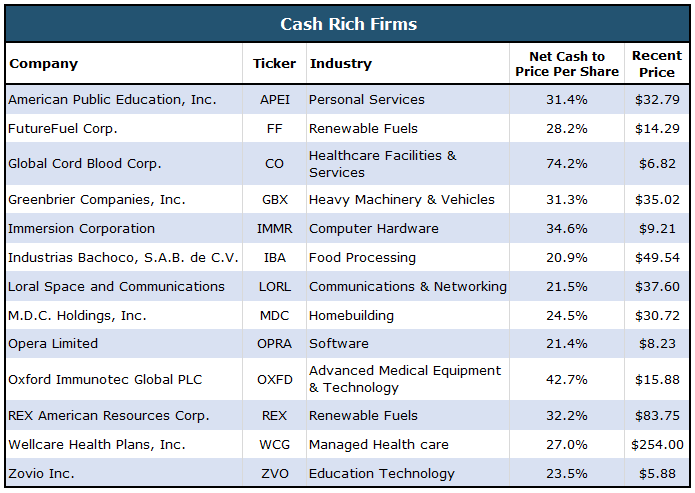 One company from the list that piques my interest is Wellcare Health Plans (NYSE: WCG), a provider of managed care services to families, children, seniors and individuals. As of the end of last year, it served roughly 5.5 million members across the United States. It’s one of the bigger companies on the list, with a market cap of $12.7 billion and total 2018 revenue of $20.4 billion, which was up 20% from the prior year. And of course, the company has plenty of cash on hand ($3.7 billion) as compared to total debt of $2.1 billion.

Another interesting company is Oxford Immunotec Global (Nasdaq: OXFD), a UK firm. This diagnostics company focuses on developing and commercializing proprietary tests for underserved immune-regulated conditions worldwide. Its products include its proprietary T-SPOT1.TB test, which is used to test for tuberculosis. It also offers tests for tick-borne diseases, such as Lyme disease and babesiosis.

Action To Take
Keep in mind that the investing ideas presented here are intended to provide a starting point for further research, not a final recommendation. With that said, I’ll be keeping an eye on each one of these stocks as a potential future addition to my Top Stock Advisor portfolio.

In the meantime, I want to invite you to check out a special podcast we’ve just put out that you won’t want to miss…

In this episode, we talk about something called “MiracleBlood” — it’s a new type of blood cell that could kill 12 types of cancer… eradicate heart disease… diabetes… arthritis… Alzheimer’s… and extend your life by another 50 vibrant years. And what’s more, investors who get in now stand to make a fortune. Click here to listen and learn more…