Investors Are Terrified Of This Sector — And I’m Glad

Many people are still terrified of the housing market. And rightfully so… many folks lost their jobs, their homes, their savings, and had to postpone retirement when the sub-prime mortgage industry dragged stocks and the economy down the drain a little more than a decade ago.

Tell many of those same people that the median home sales price in the United States is more than $317,000, which dwarfs the peak in 2007 of $257,000, and they might think another downturn is imminent.

Any data that portray weakness in the housing market sends shockwaves through the industry. We only need to look at 2018 as an example of the tenderness that investors have toward the real estate market. After coming off a stellar 2017, investors became worried that housing was heating up too fast, and home-sales were slowing on speculation that rising interest rates would keep buyers at bay. 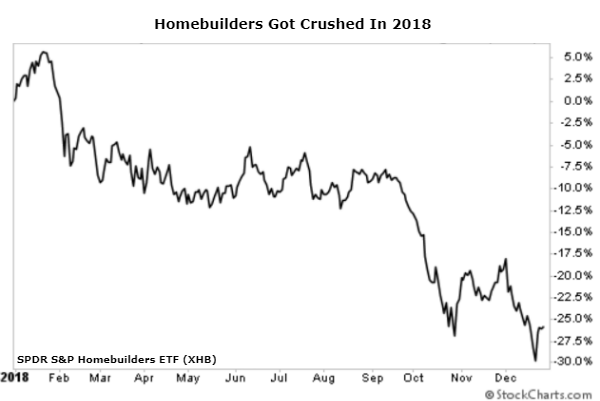 Even today, demand for housing outstrips supply. At the current pace of home sales, it would take only 3.9 months to exhaust the available inventory. This is below the long-term average of six months — an indication of just how nervous investors and builders are about building up supply.

I talked extensively about this with my Top Stock Advisor readers back in November of last year.. As I said then, I think the pessimism [in the housing market] is overblown. There are some good deals to be had among housing (and housing-related) stocks — and my readers and I have been following the space accordingly.

But the housing market isn’t the only industry still feeling the ripple effects from the 2008 financial crisis. I’ve found another industry that has investors scared of another 2008-like crisis.

Many of the top companies in this industry lost more than 65% of their value last year. And similar to the housing market, I believe the pessimism is overblown, providing us with an opportunity to pick up shares of the best player in this space for dirt cheap.

Sure, this industry is much more cyclical than the housing market, but like the housing space, weaker-than-expected data in RV shipments at the beginning of 2018 sent shares of these stocks into a downward spiral.

With memories of 2008 still fresh, investors didn’t just walk away from the industry last year — they ran, leaving my favorite pick trading for a valuation we haven’t seen since 2008.

Here’s How We’ll Profit From This Beaten Down Industry
On the surface, the story for recreational vehicles is simple.

The baby boomer generation is entering retirement and looking to hit the road and explore the country — not in a Volkswagen van, mind you, but vehicles that feature all the comforts of a hotel.

This generation of nearly 80 million-strong at their peak has left its mark on history. They’ve revolutionized entire industries, created new markets and saved entire corporations. Everything they touched turned to gold. If you had the foresight to get ahead of the massive spending power this generation provided as they passed through the different stages of their lives, you would have made a tremendous amount of money.

For example, when Chrysler was on the verge of bankruptcy in 1978, boomers were having kids and buying homes. Chrysler introduced the now iconic wood-paneled Dodge Caravan — aka the minivan. The minivan would go on to become the best-selling vehicle for the next 25 years, as it was the vehicle of choice for baby boomers.

The story is similar for Harley-Davidson (NYSE: HOG). In 1981, American Machine and Foundry nearly killed the iconic motorcycle brand and sold the company to 13 investors for a mere $80 million. With the company under new management, they decided to revive the look and feel of the earlier machine… banking that the aging boomers would want to relive their glory days. 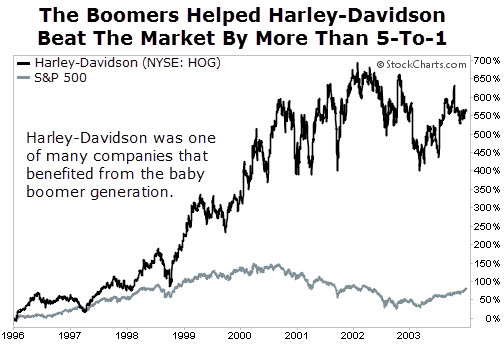 It’s easy to see the sort of wealth creation that an entire generation can create for companies and industries. You simply have to have the foresight to get ahead of whatever that generation is going to touch next.

The recreational vehicle industry enjoyed similar success as the boomers neared retirement. The first boomer turned 55 in 2001. That year, more than 256,000 RVs were shipped to retailers around the United States and the RV industry market value was $8.6 billion.

Over the next five years, those figures climbed steadily, where they peaked in 2006 at 391,000 RV shipments and a market value of more than $14.7 billion.

Then the financial crisis happened… 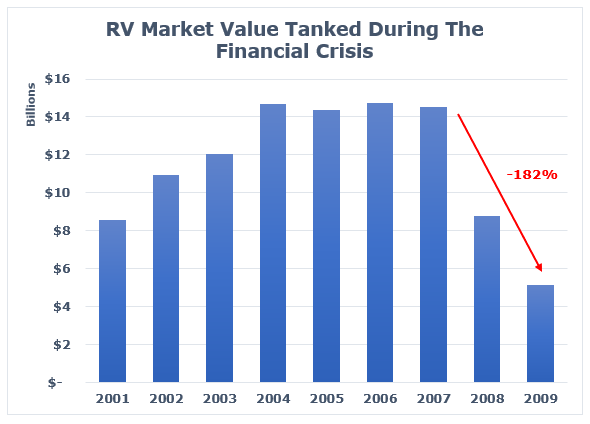 It was crushing for the industry, to say the least. And just like the housing market, investors are still skittish. For example, in 2018 RV unit shipments shrank 4.1% compared with 2017. It was the industry’s first contraction since 2009. The weak data sent shares of top RV manufacturers tumbling.

It’s Not Just Boomers Who Love RVs
You see, the boomers are still enjoying retirement and buying RVs to travel the country. That generation has played an integral role in bringing RV sales to all-time highs. As it happens, I just purchased a camping trailer from a retired couple who were looking to upgrade. Another retired couple that I had dinner with recently were passing through on their way back from purchasing their second camp trailer.

#-ad_banner-#The point is, the boomers are still strong participants in this market. But most investors are overlooking another buying group that’s helped propel the industry to new heights: The millennial generation.

The millennials have bucked the traditional trends of staying at one job for long periods of time. They’re not getting married and having kids as young as previous generations, and they’re not buying homes (yet). They’re known more for craving “experiences” over material things. Their work-life balance is drastically different, too. Thanks in large part to technology, this generation has more freedom to work remotely, or freelance, or essentially not be tied down. Instead, this generation has done things like transform school buses into mobile living homes, gravitate toward the tiny-home movement, and enjoy the nostalgia of “retro” artifacts like Airstreams and vinyl discs.

The RV manufacturers, of course, are beginning to capitalize on this. For example, Airstream built its Basecamp trailer, which is marketed as a small extreme-adventuring trailer, with the Millennial generation in mind. 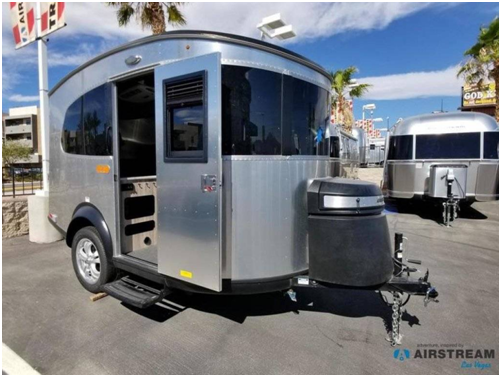 Action To Take
​In short, we have two of history’s largest generations providing strong tailwinds for the recreational vehicles industry, and thanks to some weaker-than-expected data shares of the top RV manufacturers are trading at a steep discount.

That sounds like the perfect time to be greedy when others are fearful, if you ask me.

Now, there are several ways you can play this. One is with the RV manufacturers themselves, like Winnebago Industries (NYSE: WGO) or Thor Industries (NYSE: THO). Another is with related-plays like REV Group (NYSE: REVG), which makes “specialty” vehicles (think emergency, fire & rescue, school buses, luxury coach buses, and RVs). And yet another still could be a company like Patrick Industries (Nasdaq: PATK), which owns a number of brands that make everything from laminate floors to glass components to countertops to dash boards for RVs, manufactured homes, and more.

Now, I’ve researched this space very closely — and I do have a favorite, but that’s for my Top Stock Advisor subscriber premium readers only. But feel free to look into these names further on your own. Based on my experience, some of the biggest winners can be found in out-of-favor sectors like this one.

P.S. A colleague of mine recently told me about how, six decades ago, President Eisenhower quietly signed a piece of legislation that created one of the most unique investing programs ever conceived. This plan allows you to get a refund for some of the money you pay on your mortgage each month. And lets you collect a share of other people’s mortgage payments as well. Payouts range from a few hundred dollars all the way up to $6,129 a month. Sometimes more. Here’s how to claim your share.