If You Want To Be Better Than The “Average” Investor, Learn This…

It’s a sad truth. But the average investor is terrible at investing.

This isn’t just my opinion. This is what the data says. In fact, the troubling reality is that many would be better off putting their money under their mattress and allowing their purchasing power to erode with inflation.

That may sound shocking to you, but let’s take a look at the facts…

Consider a study from Dalbar, a financial services market research firm. Theyt found that in 2018, where the S&P 500 lost some 4.4%, the average investor lost 9.4%. This wasn’t a one-off year, either. Over a 30-year period, the average stock investor generated an annualized return of 4.1%, less than half of the S&P 500’s 10%.

One of the biggest factors behind such poor performance by the average investor is that emotion gets in the way. Most investors lock in gains too soon while hoping that their losers rebound. This phenomenon is called “loss aversion” in the field of behavioral economics. 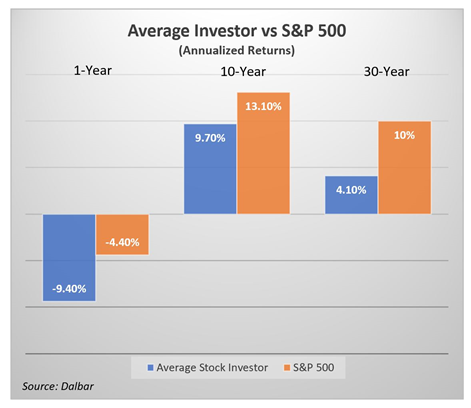 In their excellent book, “Why Smart People Make Big Money Mistakes and How To Correct Them,” authors Gary Belsky and Thomas Gilovich expand on this idea in some detail. They point out that oversensitivity to losing money can also sometimes make us hold on to losing investments for longer than we should. To quote the authors:

Ask yourself if you’ve ever sold a stock not because you thought it was finished rising, but because you wanted to ‘lock in profits.’ And ask yourself how many times you’ve held on to a losing stock or mutual fund because you were sure it would ‘come back.’

The Difference Between “Average” And Great

I know I talk a lot about letting your winners run and, more important, cutting your losers short. But I can’t stress enough how important this is. And this Dalbar study proves exactly why.

It helps to have a clear plan going into a trade. This is why I recommend readers consider using stop-losses, for example. They force you to get out of a trade before your emotions get the better of you.

Over at my premium service, Maximum Profit, our system does just that… It doesn’t let us wait for a stock to rebound — and that’s a good thing. If a trade isn’t working out, we cut it and move on.

Take Glu Mobile (Nasdaq: GLUU), for example. A while back, our system flagged it as a “buy”. In May that year, the stock was showing strong momentum – but that momentum quickly vanished after it reported earnings. Investors didn’t like what they heard and sold fast and hard. As a result, our system flashed a “sell” signal, so we cut our losses and moved on.

And as it turned out, I’m sure glad we cut our losses when we did. Because investors who decided to wait for the stock to climb back closer to their entry price saw their original investment cut in half. 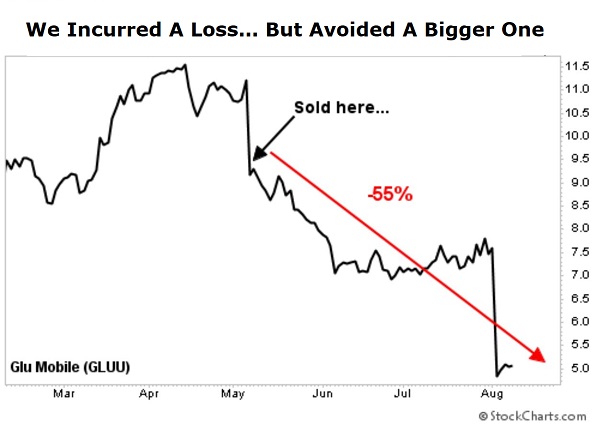 As a result, we lost roughly 17%. Now, don’t get me wrong, I hate it when that happens. We’ve found more than our fair share of double and triple-gains with the system in the past. But remember, no system is perfect. So as long as my followers used proper position sizing and followed our signals, they were just fine.

It’s hard to realize what a 50% loss means… and what’s required just to recoup the original investment. A 50% loss requires a 100% return just to break even. Triple-digit gainers aren’t easy to come by. But a 17% loss requires roughly 20% to get your money back — a much easier pill to swallow.

When the market throws a temper tantrum (like we’ve seen recently), don’t let emotions dictate your trades. Take a step back and think logically. Have stop-losses in place and rules to follow.

They don’t have to be our rules over at Maximum Profit, either. Just have some and follow them. If you get stopped out of a trade, it’s okay. You can always get back in. You can always find another opportunity.

Editor’s Note: As investors look for a safe haven in an uncertain market, gold is coming back into the spotlight.

And my colleague Dr. Stephen Leeb recently discovered a company that’s sitting on what could be the largest gold deposit ever discovered…

Barely anyone is talking about this deposit right now… But he’s telling anybody that will listen that now is the time to get in on this pick. If he’s right, it could allow early investors to make 20-times their money… maybe more.