As he stepped through my front door, he blew a big puff of smoke and tucked the vape pen into his pocket. I kept quiet, as I was in the middle of working through some remaining remodeling logistics. But I wasn’t happy about what I just saw.

I later told my contractor that I did not want to see another person vape or smoke in my house. Plain and simple, vaping irritates me in much the same way that many people are irritated by the smoking of cigarettes. Maybe it has something to do with seeing kids in the parking lot hitting their vape pen and blowing a big plume in the air, thinking it makes them look cool.

In case you’re not familiar, vaping is the use of a small battery-powered device called an electronic pen, or e-cigarette. This e-cigarette heats nicotine (extracted from tobacco), flavorings and other chemicals to create a water vapor that is inhaled. The tobacco itself doesn’t ignite as it does with a traditional cigarette. So, there’s no smoke, just water vapor containing nicotine. Vape pens are also used to smoke marijuana.

E-cigarettes have taken the smoking world by storm, ballooning into a multibillion-dollar industry.

The stated goal of e-cigarettes is to help adult smokers transition away from combustible cigarettes and offer a less toxic alternative. Unfortunately, another group has helped propel the popularity of e-cigarettes, and that’s middle and high school students.

Tobacco usage among middle and high school students was on a steady decline until 2017. Then the number of students using tobacco increased, largely because of the growing popularity of e-cigarettes.

The stunning increase in e-cig use among high school students was the main incentive for why the Food and Drug Administration (FDA) announced enforcement actions against e-cig retailers and manufacturers late last year.

More recently, the industry has come under attack on several fronts…

The U.S. Centers for Disease Control and Prevention (CDC) announced September 19 the eighth U.S. death linked to vaping. The total number of cases of vaping-related illnesses has risen to more than 500. This news comes after an FDA announcement earlier this month that it’s investigating whether e-cigs cause seizures. The FDA received 127 reports of seizures or other neurological symptoms between 2010 and 2019. Then the CDC and FDA said they are jointly looking into 215 cases of respiratory illnesses.

All of which has prompted four states at last count — Michigan, New York, Massachusetts and Rhode Island — to ban flavored e-cigarettes. In Michigan’s case, the ban will last for six months. The Trump administration said it plans to enact similar regulations at the federal level. Massachusetts took things one step further by announcing that it will place a four-month ban on all sales of vaping products, not just flavored ones.

This is clearly not good for companies that make e-cigarettes.

But whenever I see this much negative attention given to a certain industry or company, I look for investing opportunities.

To be sure, I do think a crackdown on marketing vaping products to youth is necessary. I’m personally not a fan of vaping or smoking (by anyone regardless of age), but regulations to curb use among young students is a prudent step.

#-ad_banner-#However, I’m also a realist. The majority of e-cig users are adults, and nicotine is an addictive product. If users can’t buy vape pens and the associated tobacco cartridges, they will simply switch back to regular cigarettes. They will still need their nicotine fix.

For the most part, the strict regulations are temporary bans, lasting four to six months. Of course, they can be renewed, but when the media turns its focus on its next big “crisis,” I wouldn’t be surprised if these temporary bans are also forgotten about.

The respiratory issues and deaths seem to stem primarily from the use of marijuana products and other drugs bought off the street. The CDC has said many of the victims were using e-cigs to consume THC, the psychoactive ingredient in cannabis, via black-market products.

So what about the other roughly 9,999,500 million people who vape nicotine each month? You’d think that if there were a widespread problem with nicotine vaping and e-cigs in general, we’d be seeing more incidents of illness. Hence, my interest…

It Pays To Look For Opportunity Amid Crisis
Long-time readers of Top Stock Advisor know that I call this “crisis investing.” For example, we picked up shares of American Express (NYSE: AXP) after it had a falling out with Costco (Nasdaq: COST) (the warehouse shopping giant announced it would stop accepting the former’s credit cards). We’ve done well with that investment so far… 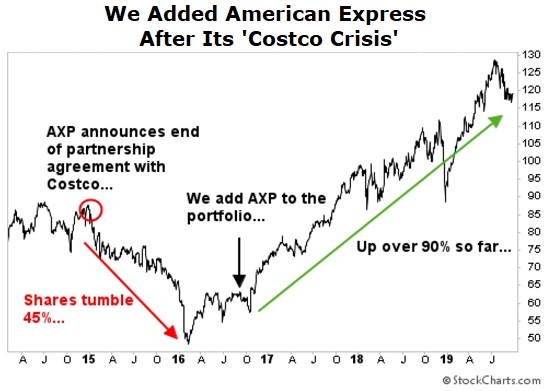 Another example is Facebook (Nasdaq: FB). Last year was a terrible year for the social media giant, closing down more than 25%. The company was constantly in the news about its affairs with Cambridge Analytica, privacy issues, and a host of other problems. You might even recall the “DeleteFacebook” hashtag trending for much of last year. But the fundamentals told a different story… Facebook generates billions in free cash flow, grows revenue at a double-digit clip, and even continued to grow its user base. Shares of Facebook have since recovered from the company’s 2018 crisis.

Action To Take
When I see this much negative press regarding an industry or company, I like to dig deeper as there’s usually a good investing opportunity lurking in the weeds — or in plain sight.

All the negative press surrounding e-cigarettes has taken a toll on the industry, which has increasingly consolidated under the banner of the big tobacco companies.

So as much as I dislike vaping (and smoking in general), we recently added one of the major tobacco players to our Top Stock Advisor portfolio.

And here’s the thing… Big Tobacco has been down this road before. They’re well-seasoned in navigating the pitfalls of regulation — and yet they’ve still been fantastic investments for those with the contrarian mindset to buy when they were hated.

And while we’re on the topic of “crisis” investing, I’ve been telling my readers about Dr. Stephen Leeb’s shocking new report about the fatal technology flaw that could bring America’s 5g wireless network rollout to a screeching halt…

You’ve no doubt heard about the promise of 5g… faster downloads, instant streaming from anywhere, and massive data loads that could usher in a wave of new innovation similar to the dawn of the internet… But there’s just one big problem — and one $5 stock that holds the keys to fixing it. Go here to learn about what could be the biggest tech opportunity of all time.