I’ve Got My Eye On Lithium — And So Should You

Believe it or not, but the first battery came about from the dissection of a frog.

In 1780, Luigi Galvani was dissecting a frog affixed to a brass hook. When he touched the frog’s leg with his iron scalpel, the leg twitched. Galvani believed the energy stemmed from the frog and called it “animal electricity.” His friend and physicist Alessandro Volta thought differently. Volta thought the animal electricity was actually a result of two different metals joined together.

Volta was right. After much experimentation, he invented the first true battery around 1800, called the Voltaic Pile. The voltaic pile consisted of pairs of copper and zinc discs piled on top of each other, separated by a layer of cloth or cardboard soaked in brine. The device pile produced a continuous stream of electricity, albeit only an hour’s worth at best. Still, it was a major leap forward that launched a rapid evolution in batteries.

Today, alkaline batteries are what you’ll usually find when you purchase a pack of AA or AAA batteries. Alkaline batteries are still in high demand, but there’s been a major shift towards lithium. In fact, we have good reason to believe that lithium batteries are the future. This is especially true when it comes to large, power-hungry devices like tools, laptops, mowers, and vehicles. And investors who spot the trend now stand to make a killing.

I’ll get to that in a moment. But first, let’s understand lithium a little deeper. 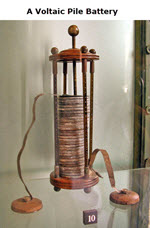 Lithium is a soft, silvery-white alkali metal. It is the lightest metal and the lightest solid element. Interesting fact: lithium does not occur naturally by itself in nature. It’s found as a compound in mineral deposits or salts including brine lakes and seawater.

The largest global market for lithium is for use in glass and ceramics. But the fastest-growing (and second-largest) market for lithium is in batteries. It’s also used as a thickener in grease to ensure lubrication properties are maintained over a broad range of temperatures. Other applications include aluminum smelting, large industrial refrigeration systems, as well as pharmaceutical products (such as treatment for bipolar disorder).

Lithium batteries have many advantages over alkaline. They can charge and recharge many times without wearing out. They also have high energy density, which means they store a lot of energy per unit of weight and volume. In other words, they are more powerful, yet lighter than alkaline batteries.

Lithium has been one of the highest growth markets in the specialty chemicals industry over the last few years. It’s expected to top $92 billion by 2024, which would be a 16.5% compounded annual growth rate.

In large part the growth has stemmed from the demand for electric vehicles, which are powered by massive lithium batteries. But the growth in mobile devices and electric grid storage has also contributed to the demand of lithium.

The Rise — And Crash — Of Lithium

The demand for lithium batteries really began to pick up steam in 2016. That’s when Tesla unveiled its Model 3 in March 2016. A week after the unveiling, global reservations totaled 325,000 units. By comparison, in all of 2015, Tesla produced less than 50,000 vehicles.

With that much demand, Tesla would need a boatload of lithium to power its vehicles. At the time, Tesla’s Model S ran on an 85kWh battery pack. It weighed 1,200 pounds and contained 7,104 lithium-ion battery cells. Today, Tesla models have a 100kWh battery loaded with lithium-ion.

The demand for electric vehicles caused lithium to become the hottest commodity around… and the price of the soft, silvery-white compound skyrocketed. From its low in February 2016 through the end of the year, the price jumped 50%.

That was only the beginning… By the end of 2017, it was up another 70%. Stocks that mined lithium also saw incredible price gains. For instance, Sociedad Quimica Y Minera (NYSE: SQM) is one of the world’s largest lithium miners. Its stock climbed 245% between 2016 and the end of 2017. 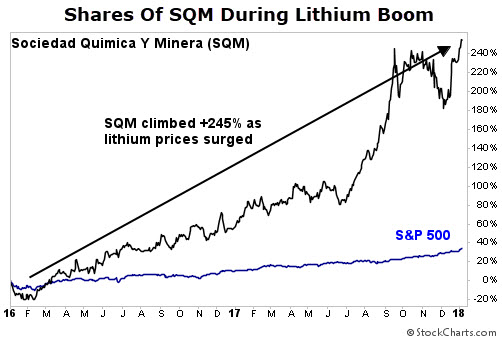 But like many commodity cycles, the mass production of lithium created an oversupply. That surplus caused the prices of the once-hot commodity to tumble. 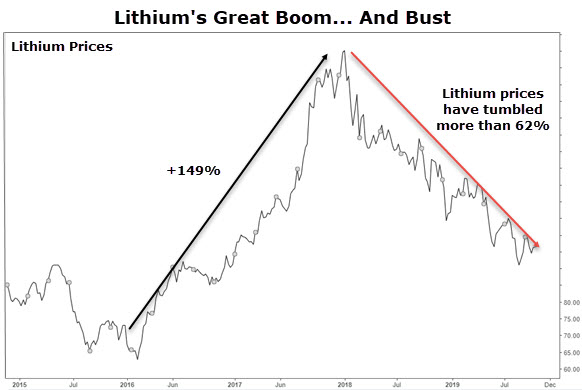 The very companies that quickly rose with lithium also saw their shares plunge. SQM is down around 55% since its highs in January 2018. Lithium and lithium-related stocks have been hit hard.

Today, few investors are interested. Sentiment is still negative, as talks of oversupply are depressing the price of lithium further.

When something is hated and left for dead, you should investigate. Patient investors often find wonderful companies trading at a deep discount in these situations.

The short-term mindset of investors can often create amazing investing opportunities. After all, it’s not like lithium batteries are going extinct. They’ll continue to be used in electric vehicles, smartphones, tablets, power tools, lawnmowers, weed whackers, leaf blowers, you name it… If it requires a battery, chances are good that it will be a lithium one.

There are only a few ways for investors to play lithium. I’ve mentioned one of them today. After doing some thorough investigation, however, I’ve landed on something I prefer a little better for my premium subscribers. But either way, if you’re looking for an exciting rebound play in the world of commodities, do yourself a favor and look into lithium. You’ll be glad you did.

P.S. There’s another opportunity I’m excited about that’s also being totally ignored by the mainstream financial media. And that’s how the rollout of 5G technology will affect the life of every single American. There’s just one problem…

According to our research, there’s a “fatal flaw” with 5G that will make the rollout impossible without one small company’s key technology. The good news: if you buy these cheap shares today, you could see a life-changing gain over the next few months. But there may be only a few days left before Wall Street catches wind of this company and spoils the party for everyone. This report shows you how to get started right away.