How “Buy-And-Hold” Can (Sometimes) Destroy Your Portfolio

A popular investment strategy is to buy quality stocks and plan to hold them for the long term.

The buy-and-hold strategy became popular because it works well — sometimes. From 1982 to 2000, buying and holding delivered exceptional returns. At other times, the results are nothing short of disastrous. Bank stocks offer an example of the latter case.

In 2006, Bank of America (NYSE: BAC) was one of the world’s largest banks. Its profitable mortgage originating division powered strong returns for investors. It seemed like the perfect company for a buy-and-hold investor, with the ability to earn steady profits year after year.

The stock began trading down as home prices peaked. This was despite assurances from many analysts and policymakers that the housing market did not present a risk to the overall economy.

We all know what happened next. Of course, BAC has gained a lot of ground since March 2009 — the overall market bottom. Despite that gain, the stock remains well off its highs in ’07-’08.

That means any long-term buy-and-hold investors with the stomach to sit through that tumultuous period may still be sitting on losses.

Some buy-and-hold investors will point out that the dangers of individual stocks can be avoided with index funds. But anyone who held the QQQ (which tracks the tech-heavy Nasdaq index) during the 10-year period between the tech bubble and the financial crisis can tell you that indexes are not always the best way to preserve wealth, either. 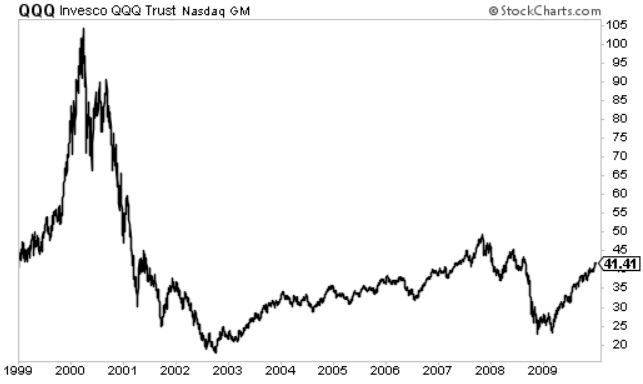 Here’s another factor… In addition to having all of the downside of a bear market, index funds place a limit on an investor’s potential upside. They are guaranteed to achieve mediocre results since they are designed to track the market and will never be able to beat their benchmark.

The Pragmatic Approach To Buy-And-Hold

We believe these types of results can be avoided by simply tweaking your approach. Think of it as a “buy and hold until something important changes” strategy.

In the case of BAC, the real estate market and global credit crisis presented significant changes to its operating environment. Selling when these changes were evident would have avoided a large part of the losses.

Investors buying QQQ near its peak in 2000 were expecting to be rewarded because the Internet was about to change the world. Online commerce would replace all physical stores. By the time it became evident that would not happen, investors already had large losses. In this case, the technical picture changed in QQQ as the ETF fell below long-term moving averages in the middle of 2000 and gave numerous sell signals.

Rather than selling when something important changes, many investors stick with their original beliefs and view dips as buying opportunities. In hindsight, they often discover that fighting against the facts can become an expensive battle to wage. If you want to be a successful investor (or trader), understand that every single position that’s open will eventually need to be closed. If we buy a stock, it might need to be sold when the relative strength (RS) changes or when fundamental measures like growth in cash flow slow significantly.

Planning to sell is consistent with the advice of value investors like Peter Lynch, the superstar manager of the Fidelity Magellan Fund for many years. Lynch advised understanding the reason you are buying a stock and keeping the rationale for the buy simple enough to fit on one side of a small index card. When the reasons you bought are no longer true, it is time to sell.

Following this strategy will rarely help you get out at the top. But it should help you avoid the kind of losses that threatened the financial security of many individuals in bear markets that began in 2000 and 2008. And while it’s easier said than done, nobody likes to throw in the towel. But just look at all of the wasted time represented in those two charts above.

We don’t know when the next bear market will begin. But we can be on the lookout for a change in economic, fundamental, and technical conditions that accompany bear markets. Then, we can react to those changes rather than letting losses grow. In short, define what will cause you to sell each of your holdings and plan to act when those conditions are met.

Editor’s Note: The average S&P 500 stock yields less than 2%. But that’s not true over at High-Yield Investing...

We’re earning safe, secure yields of 5%, 7%, 9% and more from securities most investors don’t even know exist.

To learn more about the highest yields the market has to offer go here now.