Why Argentina’s Latest Crisis Is A Big Opportunity

I wouldn’t blame you if you weren’t aware of what I’m about to tell you. After all, the headlines lately have been dominated by trade wars, domestic politics, and then the holiday season, of course.

But there is a political upheaval taking place thousands of miles from us that is going practically ignored. (And no, I’m not talking about Hong Kong.)

And while what’s happening is being ignored by the mainstream media, it could prove to be a once-in-a-generation opportunity for savvy investors.

I’m talking about the political crisis in Argentina.

I’ll touch on this more in a moment. But first, a little background…

For those who aren’t aware, I have some personal experience with Argentina. In fact, I lived there for a time many years ago. And while my Spanish isn’t what it used to be, I still remember the stories I was told by the locals. And I experienced a few things myself, of course… 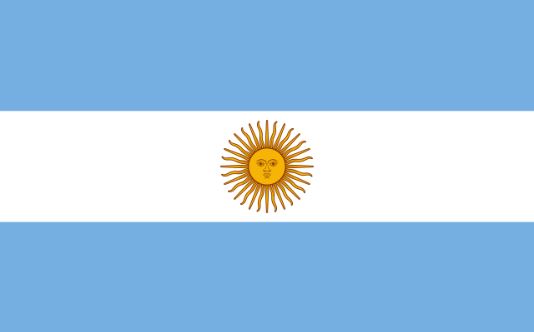 ​In the brief time I lived in Argentina, I had friends and colleagues who were raped, beaten, bitten, robbed, and held at gunpoint. I once witnessed a police car speed down our neighborhood street and literally fling the door open to take a guy out. I also saw cops frequenting a local lunch spot drinking beer while still on duty.

The government was incredibly corrupt. A prosecutor was investigating former President Cristina Fernandez de Kirchner for conspiring to cover up Iranian involvement in a terrorist attack. He was mysteriously killed just a week after making his accusations.

The business world was just as crazy. Nobody trusted banks (which given what happened in 2002 is understandable, which I’ll talk more about in a bit).

One of the most comical yet frustrating tasks was getting change for bus fare. The buses only accepted coins. But unlike in America where you’ll likely find some change underneath your couch cushions, in Argentina, they were nearly impossible to come by.

Looking at real estate? You better have more than 50% to put down, because getting a loan was nearly impossible. Most real estate transactions were done with all cash. The same goes for starting a business… private money was the only way to obtain financing.

The point is, Argentina’s whole economic situation is just as bizarre as many of the things I witnessed while living there. And it’s been like this for decades…

A History Of Argentina’s Economic Crises

Argentina has a long history of economic crises. Since achieving independence in 1816, the country has defaulted on its external debts nine times. The most recent one came at the turn of the century.

In 2001, the country was experiencing runaway inflation, as well as economic contractions similar to those experienced in the United States during the Great Depression. The government suspended payments on its external debts and restricted bank withdrawals. By 2002, its currency had depreciated 356% against the U.S. Dollar. Inflation was running at 72%. The country was in terrible shape.

To give you an idea of just how bad things were, imagine that you had $50,000 saved up in your bank account. Well, the government was in such dire need of cash that it essentially locked up all the deposits on the balance sheets of banks and didn’t allow customers to withdraw their cash. That wasn’t even the worst part…

Let’s say that $50,000 was in U.S. dollars. The government converted those dollars to Argentine pesos (without your permission). Now recall that Argentina’s currency had been greatly devalued against the U.S. dollar. That means, your $50,000 is now essentially worthless…

People needed cash but had no access to it. If you were wealthy on paper, you were now poor. Riots ensued, people died, banks were burned. It wasn’t pretty. The country’s main stock index, the Merval Index, lost over 60% of its value in 2001 alone.

To say times were tough back then for Argentinians is an understatement. The stories I heard from the locals were unbelievable, scary, and sad all at the same time. It was also a shame, since Argentina has historically been one of the most economically prosperous, cosmopolitan, and promising countries in South America.

Why History May Repeat Itself

But when crisis hits, opportunity is also lurking. Argentina’s economy eventually recovered, and so too did the Merval Index… climbing more than 330% over the next three years: 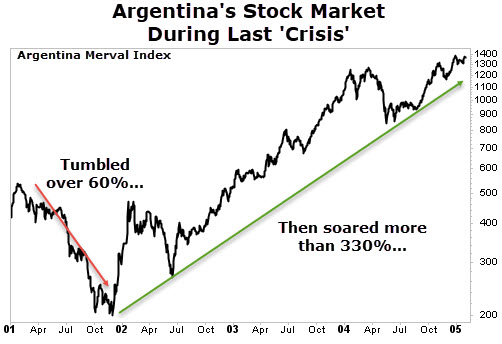 However, as Mark Twain reportedly said, “History doesn’t repeat itself. But it often rhymes.” And unfortunately for the people of Argentina, the past couple of years are reminiscent of the previous crisis.

Since 2017, Argentina has been in the throes of another economic crisis. GDP has contracted, and inflation is once again running rampant — to the tune of 52% in the last 12 months.

Argentina’s peso has lost a third of its value versus the dollar since July. It has now fallen more than 80% in the last four years. And the country’s unemployment rate is hovering around 10%.

The Merval Index also tumbled more than 42% in the month of August alone. This was due in large part to a surprise turn of events in the country’s presidential race: Alberto Fernandez upset sitting president Mauricio Macri. Why is this a problem? Well, Fernandez’s Vice President is Cristina Kirchner… the former president who faces nearly a dozen charges of bribery, embezzlement, and money laundering from her time in office.

Things are pretty bleak at the moment. But here’s the thing… it’s when everyone has given up hope… when the towel is thrown in… when things are as hated as they are now in Argentina… that’s when you know they are close to rock bottom.

The last time Argentina was under similar circumstances, the market ripped off a fourfold gain in a few short years. Of course, past performance is no guarantee of future results. But even if does half of what it did back then, that’s still a darn good return.

I won’t share my preferred method today, but suffice it to say that there are several ways investors could capitalize. I should also note that this idea is a bit of a speculation, and you should treat it as such. That means after doing your own research, you should probably take a smaller position size that you normally would for your portfolio.

The bottom line is this… Despite the headwinds facing Argentina, the country is full of world-class assets that are trading at outrageously cheap prices. If things only get slightly better in the country, shares of a few key players could easily hand investors a quick gain of perhaps 50% — and possibly triple-digits for those willing to ride out the overall uncertainty.

Editor’s Note: Another investment that we think will come out on top in 2020 is marijuana stocks. You may not hear about it in the news, but this sector is set to unleash a new “the green rush” thanks to an under-the-radar law quietly zipping through Congress. It’s known as the Secure And Fair Enforcement (SAFE) Banking Act and it will flip the entire marijuana industry on its head.

In short, the SAFE Act will make providing financial services to cannabis companies a lot easier. And when the law passes, certain cannabis stocks will soar.

For all the details, including the best picks for investors, check out this report.