Good News: Some Companies Are Getting A Lot Smarter About Dividends…

We’ve seen it a million times.

A business is clicking and generating ample cash flows with a promising growth trajectory ahead. After crunching some numbers and looking at forecasts, management generously decides the time has come to share some of the projected surpluses with investors.

Unfortunately, the economy giveth, and the economy taketh away. Inevitably, the economic climate will eventually cool and earnings will start to falter. Faced with an uncertain outlook, the board prudently decides to preserve cash and cut discretionary spending. In most cases, that means rolling back dividends.

Cue the wailing from the investment community.

Dividends During The Covid Era

Every business cycle ebbs and flows, and earnings rarely march in a straight line. Since dividends are largely tied to earnings (a moving target), distributions must occasionally be adjusted up or down to reflect current operating conditions.

That’s why I remind my readers over at High-Yield Investing that, despite our best efforts as investors, dividends are never set in stone. We’ve seen this in full effect lately.

When the pandemic struck in 2020, more than 900 public U.S. companies were forced to pare back their payouts, including five dozen members of the S&P 500. Even stalwarts such as Boeing and Disney had to trim their distributions. Those cuts wiped out $82 billion in annual payments to stockholders, according to S&P Dow Jones. 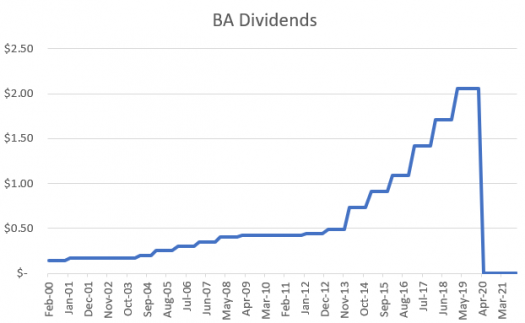 But they weren’t permanent. With conditions improving, 2,910 U.S. companies responded by raising their dividends last year. Those hikes increased annual payments by a combined $79 billion, pushing total aggregate payouts to a record $511 billion. Quite the turnaround.

Meanwhile, large-cap dividend payers have been gaining favor on Wall Street. This group truly shined in last month’s volatile selloff, outperforming non-payers by an average of 660 basis points. But I digress…

The point is that while nobody likes to see dividend cuts, those triggered by normal economic contraction shouldn’t cause any undue alarm. A business simply can’t pay out more than it takes in – at least not for long. So temporarily dialing back distributions during times of stress is an appropriate response until demand returns.

Imagine a company whose earnings might swing from $4 per share during a weak cycle to as much as $8 during a stronger one. Where do you set the payout? Too much and you have to cut whenever profits bottom out. Yet, too little and you aren’t giving stockholders enough when business is booming.

Such variable distribution policies are quite common in Europe, but never really caught on here in the U.S. That’s because American investors overreact to these “adjustments” and prefer to see level payments every 90 days.

Until recently, that is.

But it is possible to placate stockholders with a reliable, level dividend and still reward them with an extra bonus when earnings are soaring. That’s the best of both worlds.

In fact, one of our big winners over at High-Yield Investing recently implemented a policy like this. The company (an energy giant) will pay a regular quarterly dividend distribution at a level that will remain comfortable regardless of oil prices. Then, it will pay a variable return of capital (VROC) based on operating results and cash flow.

I’ve already discussed the specifics of this company’s new policy with my premium readers, and I may share that at a later time. (In fact, I’ve already covered this stock in these pages before.) But there’s a larger point here that I want you to take away from this…

Expect to see more VROC policies, especially in the resources and commodities sectors. In fact, as a recent article in Barron’s points out, it’s already happening.

Right now, times are good for most companies in these sectors — and they’re eager to share that wealth. This should come as good news for income investors. Not only does it give us more options in an increasingly yield-starved world, but it’s also a sign that many companies have learned from mistakes in the past.

Most investors aren’t even aware these investments even exist, but they’re out there. And in my latest report, I’ve compiled 5 of my favorite “bulletproof” high-yield securities — each one pays market-crushing yields, has a proven history of holding up in any economic environment, and has continually rewarded investors year after year…