The Fed’s Inflation Battle Begins, The Outlook, And How We Should Respond…

Well, the big day we’ve all been waiting for finally arrived.

The central bank has been telegraphing rate hikes for several months now. The question was simply how much, and how fast, rates will rise this year and beyond.

We got some clues as to what the answer might be on Wednesday (more on that in a moment). But to kick things off, the committee members announced a quarter-point hike, setting the target Fed Funds Rate at between 0.25% and 0.5%.

Around December and early January, some analysts were wondering if we would see a “double hike”. But markets had been selling off, and Russia’s invasion of Ukraine only added to growing global uncertainty.

The Fed’s Inflation Battle — And The Outlook For Future Hikes

By raising rates, the Fed is hoping to quell inflationary pressures sparked by post-pandemic demand and supply-chain bottlenecks. The latest Consumer Price Index reading shows prices for all items (including food and energy) spiking by 7.9% in February compared to the same month last year.

But the Fed warned in its statement that we shouldn’t expect those inflationary pressures to abate any time soon:

The Fed is in a tough position here, and policymakers will need to thread the needle with both the timing and amount of rate hikes. Raise too little (or too slowly), and inflation will only get worse. Raise too much (or too quickly), and it risks plunging the U.S. economy into a recession.

The Fed’s inflation projection for 2022, for what it’s worth, is 4.3%. That’s well above the 2.6% it projected back in December, which was also about the time the central bank finally abandoned its stubborn use of the word “transitory” when describing the nature of the problem.

Remember, as part of the Fed’s dual mandate, the goal is to keep inflation at about 2%. So there’s clearly some work to be done.

That’s why it’s important to consult the “dot plot” when Fed meetings occur. As we’ve highlighted before, this is a survey of Fed members’ assessments what they deem to be “appropriate” monetary policy over a span of time. Said another way, it shows what Fed members think the fed funds rate should be over the coming months and years. 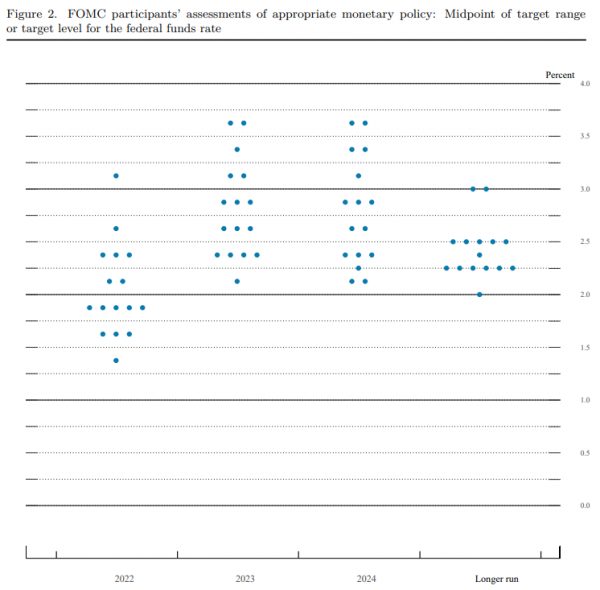 These FOMC projections indicate the likelihood of as many as six rate increases this year (which would put the Fed Funds Rate at 1.75%. The median expectation is for rates to return to 2.5% to 3% by the end of 2024.

How Investors Should Respond

As rates begin to normalize, investors need to respond accordingly. That means reconsidering your portfolio allocation in a rising-rate environment.

As we’ve seen over the past few months, the high-growth tech sector has already been impacted by the mere anticipation of higher rates. This makes sense when you consider the market is a forward-pricing mechanism. When money is cheap, it’s easy to borrow and fuel growth. But when rates are rising, any future earnings become discounted.

All of this to say, there are some pockets of value in tech. But as a whole, it may be wise to rethink whether you are “overweight” in this sector.

On the positive side, the financial sector holds some appeal right now. When rates are rising, banks will begin to earn more on their assets. The rates they pay on liabilities (such as interest on savings accounts, CDs, and the like) will always lag. This creates a nice spread on which banks can earn increasing profits. (My colleague Nathan Slaughter wrote about the appeal of smaller, regional banks in this piece.)

On another note, one asset class that has typically been ignored by investors in recent years has been commodities. And I’m not just talking about oil or gold, either…

Increasing your exposure to hard assets and raw materials is a shrewd way to simultaneously tap growth and insulate against both inflation and geopolitical turmoil. That’s where one of the world’s most vital commodities comes into play: copper.

Copper is in great demand but short supply, which spells huge future gains for producers of the “red metal.” For details about copper and our top pick to profit from its rise, click here now.