How Millennials Are Lighting A Fire Under The Pot Industry

Editor’s Note: With just a handful of days left before the 2022 midterm elections, a slew of states will have ballot measures that deal with marijuana legalization.

As our colleague John Persinos puts it, legal weed stands at the biggest tipping point in history. And that means investors have a unique opportunity to profit in the coming days.

That’s why John will be holding a special investment Town Hall on November 1, called “The Marijuana Millionaire Countdown.”

To give investors a taste of what to expect in this one-of-a-kind event, we’re featuring some of John’s insights and expert analysis of this burgeoning industry.

The marijuana boom is a genuine investment opportunity, but only if you separate the hype from reality. Problem is, the cannabis “green rush” is generating clouded judgment among investors, especially when it comes to penny stocks.

The buzz over marijuana penny stocks reminds me of the gold-crazed miners in the 1948 movie classic The Treasure of the Sierra Madre. The prospectors in this movie are so blinded by greed, they end up with nothing but self-imposed woe.

The media these days are fixated on pot stocks and all it takes is a positive news event to send a marijuana company’s shares soaring…or a mere whiff of bad news to send a pot stock plummeting.

That said, there are many entrenched, long-term tailwinds for the marijuana industry. Cannabis is no mere fad. One such tailwind is generational.

Much is made of Baby Boomers (which is my generation) and the marijuana boom. After all, it was the Woodstock generation that made Mary Jane synonymous with youthful rebellion.

However, according to a new report from New Frontier Data, the generation to watch are the Millennials, aka Generation Y (the demographic group that directly follows Generation X).

Now in their late 20s to early 40s, Millennials are becoming parents themselves. There are about 72 million Millennials in the U.S. Members of this group were born between 1981 and 1996. I wrote about this generation and their relationship to marijuana, back in 2019.

Read This Story: Millennials and Marijuana: Agents of Change

The New Frontier report, released June 15, shows that much has occurred over the last few years, in terms of this consumer base and its relationship to cannabis.

For Millennials, the biggest factor in making a marijuana purchase is potency. Price comes in at number three, yet another sign that marijuana is inflation resistant (see chart). 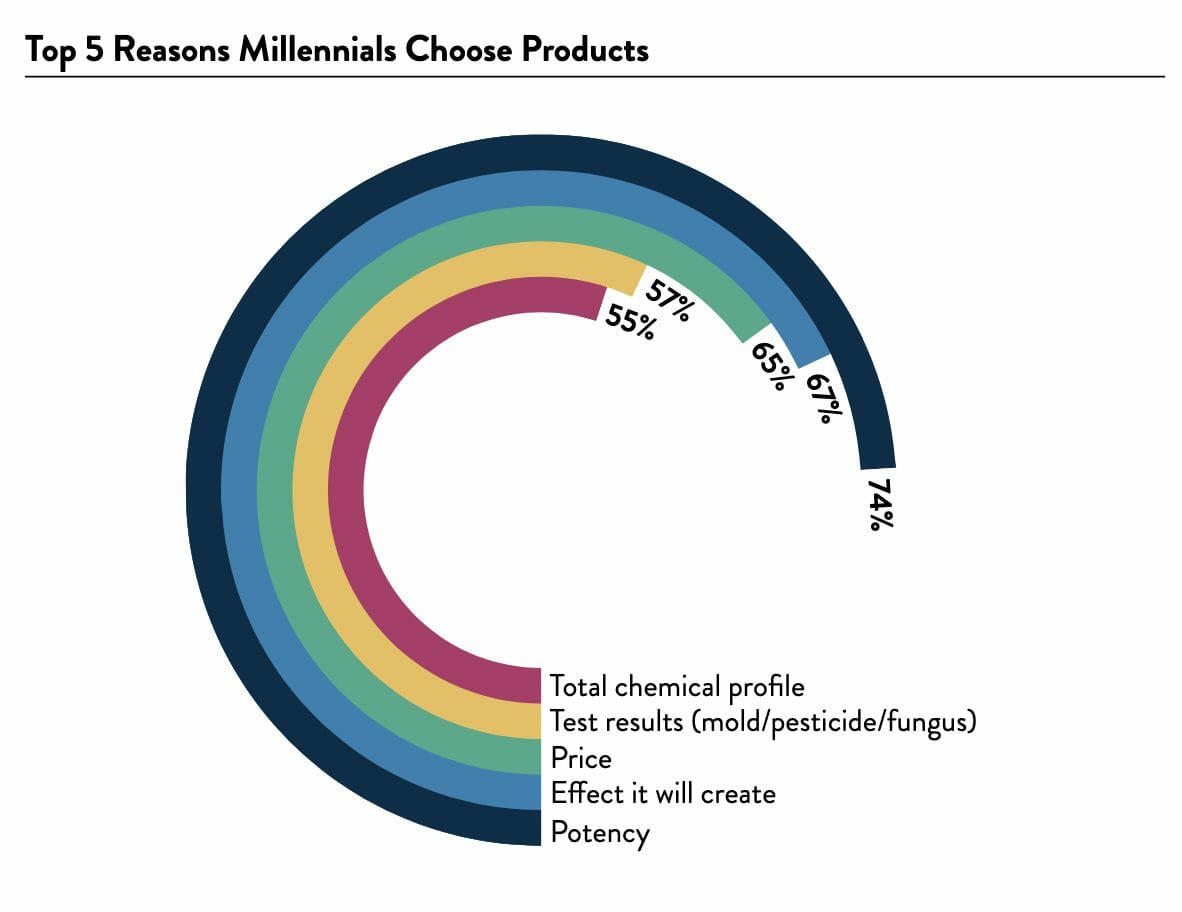 The report states: “Millennials came of age when cannabis-related social attitudes and policies were changing rapidly. As young adults, they watched the normalization of cannabis use mitigate negative stereotypes, and they have played a leading role in the emergence of the legal cannabis economy, both as participants in the market and as champions for change.”

Millennials are overtaking Baby Boomers as the largest generational cohort of the U.S. population. They were shaped by globalization and the Internet. Polls show that their social attitudes aren’t necessarily “liberal” (as with the activists of the 1960s), but they’re generally tolerant and libertarian. These are positive factors for marijuana’s future growth as a business.

Editor’s Note: Legalization (and commercialization) of marijuana is among the hottest growth opportunities that we’ll see in our lives. If you pick the right pot stock, you could reap stupendous gains. But that’s the key: picking the right stock.

As the U.S. midterm elections loom on the calendar, John will explain the little-known reason why federal legalization is on the near-term horizon…and why a slew of states are poised to create new state-legal markets.

During the online Town Hall, John will reveal the one simple marijuana trade that could dump piles of cash into your brokerage account, before the midterm votes are even counted. Click here to grab your free spot!

John Persinos
Bio | Archive
John Persinos is managing editor of Personal Finance, Utility Forecaster, and Radical Wealth Alliance. He also writes the Mind Over Markets daily stock market recap.
John has decades of experience in the technology and political realms. He's spent decades following emerging business and technology developments. From his time at Inc. and Venture magazines, to sharing breaking market news to millions of readers across Kiplinger's, Street Authority, Investing Answers, and TheStreet.com, if it's impacted investors in the past 30 years, John was there analyzing the news and interpreting the meaning for his readers. John also has experience with the inner-workings of Capitol Hill, serving as a press secretary to U.S. Rep. Byron Dorgan.
John holds undergraduate and graduate degrees from Boston University. He also completed the Davenport Fellowship in Business and Economics Reporting at the University of Missouri (Columbia).