The Best Way To Profit From Innovation

The other day, I had an idea for a product. This happens to me fairly often, and the outcome is always the same: I look online and, lo and behold, someone else has already come up with it. So after I got tired of this idea rattling around my brainpan, I Googled it.

#-ad_banner-#I found nothing. So I decided to allow the idea to marinate a little.

While I was driving to church the following Sunday, I had an inspiration. Not only did I have an idea for the product, I now thought I knew how to make it work. So after lunch, I stopped by a couple of stores and bought four ingredients. I went home and mixed them together in my garage.

The result worked exactly as I had thought it would.


I had a product. Something new. With a big market, I might add.

I built a spreadsheet to estimate costs. I went online and looked at potential packaging material and machines. I even started looking at used manufacturing equipment to mix the ingredients and fill the tubular plastic packages that I’d selected. I showed it to someone I trust who does business in the industry. He told me the idea was genius.

Build a better mousetrap — they say — and the world will beat a path to your door.

Today, a new sort of company has found a way to extract revenue from intellectual property, like this new idea I had. In fact, I’ve had very good luck with a particular pick in this sector.

And the market for this skill and service is rapidly expanding.

These patents fall into three categories: Utility patents cover how things work, design patents deal with products, and plant patents, which are fairly new, cover genetic modifications to — wait for it — plants.

The key to finding the winning investments in this space is recognizing what sets the best patent assertion entities apart from the others.

I believe it’s quite simple.

I’m all in favor of small-cap and even nano-cap companies — they can be legitimate game-changing stocks. But the key in this sector is size. Larger companies have the resources to not only sufficiently monitor and monetize their intellectual property, but they also have the wherewithal to replace expiring patents. (They’re only good for 20 years.)

For instance, one of my favorite investments is worth $1.9 billion, and it owns the company behind most of the whizbangery that makes your smartphone so smart. But it’s been around since the 1970s, and that longevity combined with its size give it the resources to succeed in the patent game.

Just this year alone the stock has returned over 80%. It’s no wonder that more than 70% of shares are held by the “smart-money” — mutual funds, pensions, endowments, insurance companies and other institutional investors. 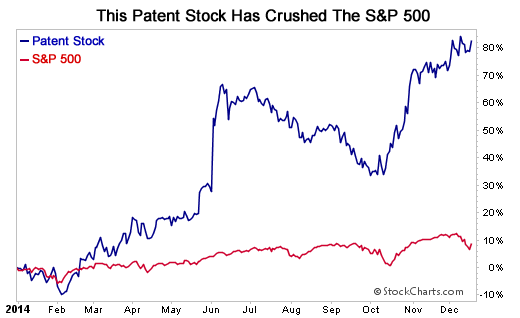 All told, IDCC has 20,500 patents and pending applications. The balance sheet is strong. Cash and short-term investments total $732 million against total debt of just $215 million. The income statement shows steady organic growth. In 2010, it posted a 39% net profit margin.

As long as people are having new ideas, the number of patent applications in this country will continue to increase, which means the profit in this sector will do the same. It’s just a matter of picking the ones with the best resources.

The rise in patents are just one of the trends I’ve been following recently. In fact, in a recent report I disclose my top game-changing innovations for 2015 — including the same kinds of ideas that have delivered 92%… 293%… even 310% gains for investors in the past.

They include the private “millionaire’s only” stock market that will be finally be opened to everyone… how Iran could unleash a new technology that will affect every American (and could turn a $2,500 investment into $11,515)… and Apple’s new currency that will upend the banking industry as we know it. To learn more about these shocking predictions and others that could make early investors a killing, follow this link.