The president’s call for a $1 trillion increase in infrastructure spending seems to have been put on hold, depressing investor sentiment for construction and infrastructure stocks this year.

While we wait for the legislative agenda to clear the way for increased fiscal stimulus, Mother Nature may soon be sending a natural force to boost spending.

The National Oceanic and Atmospheric Administration (NOAA) recently upgraded its forecast for this year’s hurricane season — and it could be one of the worst in more than a decade. Weather patterns in the Atlantic continue to build, and all the ingredients are there for another superstorm.

#-ad_banner-#When Superstorm Sandy hit the east coast in October 2012, the S&P 500 tumbled 4% over two weeks and it took the rest of the year to recover as the nation assessed the damage.

But I’ve found five infrastructure and power companies that have continuously outperformed the market during high-activity hurricane years.

These best-of-breed names have multiple upside catalysts, including both heightened storm activity and renewed interest in an infrastructure bill from Washington.

Batten Down The Hatches
The NOAA is currently saying there is a 60% chance of an above-normal season. The agency is predicting up to 19 named storms through the season, which runs from June through November.

Hurricanes do seem to be getting more severe. Several storms in 2005, 2011, and 2012 are listed among the 15 deadliest and most expensive in U.S. history. Hurricane Katrina in 2005 is ranked as the third deadliest on the list and caused more than $108 billion in damage.

Wind patterns across the tropical Atlantic region, including wind shear and trade winds, have all become more conducive to strong storm formation this year. The NOAA also reported that sea surface temperatures in the area are up to two degrees warmer than normal, a key factor fueling storms.

A Stormy Season May Mean A Big Bump For These Five Stocks
While many investors look to home improvement stocks like Home Depot (NYSE: HD) and Lowes (NYSE: LOW) to surge after a strong hurricane season, the actual revenue boost from rebuilding in one region is relatively small compared to these companies’ global operations.

That could mean an even bigger bump if hurricane season sees more storms as these stocks rebound and push higher.

1. Generac Holdings (NYSE: GNRC) is a $2.3 billion leader in power generation equipment and other light-motor equipment for residential and industrial customers. The company is the market leader in home standby generators and the leading global manufacturer of mobile generators for industrial use.

When superstorm Sandy hit in 2012, the company booked a $140 million contract backlog that sent sales surging by 26% in 2013. Shares are down 3% since June but have returned an average of 54% over the last four hardest hurricane seasons and continued higher by 13% on average in the six weeks following the season.

2. Xylem (NYSE: XYL) is a global leader in water services, including testing, treating and transportation. When a massive storm hits, floodwaters can overwhelm public drinking water and mean large government contracts for making the water safe again. Beyond stronger sales on any particular hurricane season, the company should benefit from longer-term population demands on water resources.

Xylem has outperformed the broader market with a 5.8% run since June, but that’s still under its 7.4% average return during heavy hurricane seasons. Shares continued higher by 5.4% on average following the four most recent high-activity years.

3. Granite Construction (NYSE: GVA) is a $2.1 billion diversified civil contractor and construction materials producer. Heavy storms and flooding can destroy transportation infrastructure and mean multi-year rebuilding contracts. The company reported a $4.1 billion backlog in the second quarter, an increase of 8.4% over the same quarter last year. The company also stands to benefit from an increase in infrastructure spending that could boost revenue over the next several years.

Granite Construction is down nearly 11% since June as enthusiasm for a large infrastructure bill wanes. That could set the stock up for a big rebound on its 22% average increase during high-activity hurricane years.

4. Quanta Services (NYSE: PWR) is the market leader in electrical, utility, pipeline, and specialty construction contracting services in the United States. Electrical power infrastructure services account for 63% of total revenue and 79% of sales are in the United States. The company reported a backlog of $9.75 billion last year, representing 127% of annual revenue and an increase of 4% from the prior year.

Quanta Services is down 12% since June but has averaged a 17% increase over the six-month hurricane season during high-activity years. Gains have continued by 8% on average in the six weeks following the season.

5. Eagle Materials (NYSE: EXP) is a low-cost producer of structural and construction materials in the United States, including construction cement, aggregates, and gypsum wallboard. The company’s 23% operating margin is more than 10% above other major competitors and well above the industry average.

Beyond rebuilding after hurricane season, the 2015 FAST Act transportation bill is projected to increase  infrastructure construction spending by an annualized 4% through 2020. Shares are down 11% since June but have surged 22% on average during high-activity hurricane seasons. 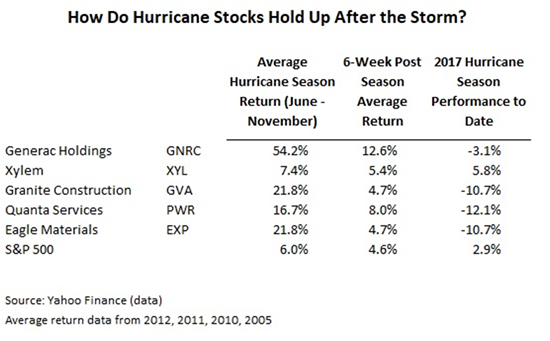 Risks To Consider: While the forecast still shows a heavy storm season, weather patterns can change quickly. Position in companies with solid fundamentals that will benefit whether 2017 brings a heavy hurricane season or not.

Action To Take: Get ahead of the storm with these stocks that tend to do well during and after a heavy hurricane season.

Editor’s Note: With the stock market nearing frenzy status, it’s time to book triple-digit gains while the getting’s good. Jimmy Butts’ latest report tells you all about the market’s 10 hottest stocks; and how to get them in your portfolio right away! Click here to read his FREE report.