In 1956, geologist M. King Hubbert came up with what seemed to be an accurate prediction of “peak oil”, a theory regarding the maxing out of U.S. oil production that goes back to 1919, using statistical modeling. Hubbert projected that U.S. oil production would peak between 1965 and 1971.

With the onset of the 1973 Arab Oil Embargo and ensuing energy crisis, Hubbert’s theory seemed dead on, mainly due to the United States’ dependence on imported oil increasing during the latter part of the 20th century. But here’s what really happened.

And the effect on the price of oil? We know that story from visiting the pumps. 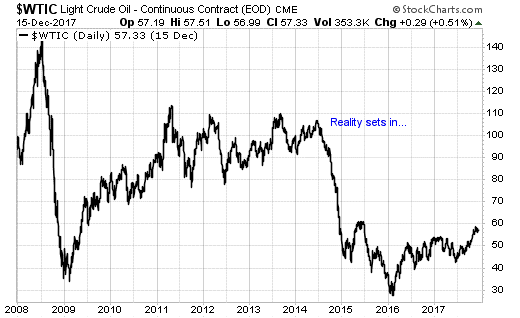 #-ad_banner-#The price of West Texas Intermediate crude (WTI) has declined nearly 62% in the last decade. Has demand dropped off? Hardly. But supply and the ability to efficiently manage the supply has changed dramatically.

Never say never, but the odds don’t favor the price of oil reaching triple digits any time soon, at least not in my lifetime — and I think I’ve got another 30 years in me. Here are three reasons why.

1. The American Oil Renaissance
Thanks to domestic hydraulic fracturing, or fracking, the United States has more or less become energy independent. In the largest shale drilling areas in the country, the Bakken, Eagle Ford, and Permian basins, production has grown more than 300% over the last decade from an average of around 391,000 barrels per day around 1.6 million barrels per day.

Based on data from the U.S. Energy Information Administration (EIA), the United States is currently the world leader in recoverable shale oil reserves, with approximately 78.2 billion barrels untapped. The shale gas picture is even larger, with a mind boggling 1.16 trillion cubic feet of recoverable reserves. Once dependent on oil from the volatile Persian Gulf, the United States has become a net exporter of oil and natural gas.

2. High Tech… Low Cost
The first cell phone produced for consumer use in 1983 (think Gordon Gekko standing on the beach in Wall Street) cost right at $4,000. Today, a smartphone with functions light years ahead of the first phone costs just a fraction of that. The same has happened with oil drilling, especially fracking.

According to the Energy Policy Institute at the University of Chicago, as the price of oil declined from more than $100 per barrel in July 2014 to less than $30 a barrel in January 2016, the cost of drilling and completion services related to fracking also fell by more than 30%. This translates into greater profitability per well over time. The main reason for this occurrence was increased efficiency due to improved technology. One of the more notable advances in shale gas drilling was the shift from vertical, single-well drilling to multiple-pad, horizontal drilling. This has enabled producers to get more bang for their buck and increase efficiency.

What does this mean for the price of oil? As newer, cheaper technologies proliferate in the market, the price of black gold will remain range bound at first, eventually drifting lower based on the enormous, available supply.

Action To Take: Going forward, huge, integrated oil companies like Chevron (NYSE: CVX) and ExxonMobil (NYSE: XOM) will need to figure out how to evolve in an environment where the price of their primary product remains flat, perhaps for decades. This will translate into flat profits and, perhaps, skinnier dividends. Currently, both stocks trade at 20-plus forward price-to-earnings ratios (PEs), much higher than their attractive historical norms. While the market has bid up these stocks, the higher multiples indicate lower-than-anticipated earnings per share (EPS).

In the near term, the most practical energy exposure for prudent investors would be fairly valued, plain vanilla pipeline and storage master limited partnerships (MLPs). Typically, these will throw off well-above-average income, which will compensate investors for their risk for the time being.

Editor’s Note: Sustainable energy is not cheap. In fact, it’s the most expensive component in an electric car. But Tesla founder Elon Musk is determined not only to make it affordable worldwide… but to also get even wealthier from this “sunshine in a box” technology as it applies to your home. Folks who get in on this huge $1.3 trillion opportunity have the potential to profit 10X over… Full details here…

Adam Fischbaum brings more than 20 years of professional investment experience as financial advisor and portfolio manager. Affiliated with an NYSE-member firm, he specializes in value, income and macro thematic investing. Adam is also a contributing editor for Yieldpig.com and his work is published frequently on TheStreet.com, BusinessInsdider.com, as well, Seeking Alpha and TalkMarkets.com. He currently holds a Series 7, 63, 65, and 31 license. Adam lives on the Gulf Coast with his wife and two sons. When he’s not running money or writing about it, he enjoys hunting and fishing.