I’m Targeting An 18.8% Gain On This Alternative Infrastructure Play

I have to say… the way recent events are playing out has me slightly unnerved.

Namely, the surprise tariffs on foreign metals and the subsequent resignation of Trump’s chief economic advisor, the level-headed Gary Cohn.

As much as I am pro-America (believe me, I am), I believe the tariff increases could have been executed a bit differently. As one of the world’s most watched “teachers,” we shouldn’t encourage the students to act first, negotiate later.

Protectionism may seem like a positive in some aspects, but I agree with past examples that trade wars in a heavily intertwined global economic fabric likely have no winners.

The bottom line is that this abrupt shift in trade policy changes the narrative and sentiment quite a bit. And although much of it is likely noise, there’s a real threat to global economic stability and sentiment, even if only psychological.

#-ad_banner-#The recent occurrences also change our stance from predominantly bullish to cautiously mixed. But the good news is that investors are no longer walking the primrose path of bullishness — and that should help our put trades!

A Bright Small-Cap Poised For Further Growth
In a world dominated by FANG stocks, blue-chip behemoths and multinational powerhouses, it can be easy to overlook some quality small caps. As the Trump administration pushes its America First and homeland-centric infrastructure policies, MasTec (NYSE: MTZ) stands to benefit.

Every analyst covering the stock who has given a price target essentially rates the stock a “buy” — every target is higher than the stock’s current price. This is rare, especially in our current market, which is still richly valued.

The consensus estimate is close to $64, 23.6% higher than the stock’s current trading price just under $52… and analyst momentum has been very strong just over the past 10 days. But shares have been unable to break out of the recent channel and are lingering around the bottom near $50. 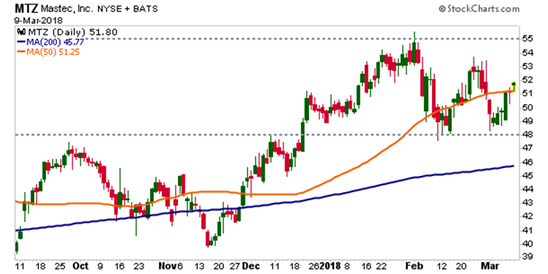 I believe the recent tariff debacle, along with general market weakness, have kept MTZ from reaching its full potential.

Part of the problem is its relative obscurity. The MasTec name isn’t thrown around on the major financial news networks on a daily basis, nor is the company’s business very sexy. But its business is an integral cog in American life and essential to our infrastructure — with or without tariffs.

MasTec employs contractors who engineer, procure, construct and maintain the infrastructures that enable companies specializing in electric transmission and distribution, oil and natural gas pipeline, and communications to produce and deliver their products from the source directly to consumers.

They engineer and erect everything from extra-high-voltage transmission lines and cross-continental oil and natural gas pipelines, to renewable energy, wireless towers and microwave backhaul systems.

The company has the ability to take potentially more expensive materials (if Trump moves forward with tariffs) and optimize them for clients — they do not produce metals.

A recent earnings report showed a near-20% jump in quarterly sales, which topped EPS estimates by 27% overall. Better than that, the company’s E&C work backlog jumped a record 31% year-over-year. This has translated to expectations for record sales in 2018.

Aside from all the bullishness in general, there’s an internal shift that I believe is also being undervalued by investors.

Just 10 years ago, MTZ was solely a communications infrastructure company. It has since grown more than 500% by diversifying into higher-growth areas. And while oil and gas still accounts for nearly 53% of sales, MasTec is further increasing its exposure to utilities and renewables, for both generation and transmission.

MasTec’s services will be in great demand over the coming years, especially as governments seek to replace ageing, inefficient infrastructure with newer, greener versions.

Bloomberg estimates that 44% of the world’s power capacity spending will be spent on clean energies, 71% in the United States alone. They estimate a $201 billion opportunity to increase capacity between 2016 and 2025 alone, with the majority of spending coming early in that period.

The bottom line is that MasTec’s future looks brighter than a high-power LED array. Given its growth potential (which was even confirmed by the company’s annual guidance), a forward P/E ratio of just 14.50 times earnings is just unfairly cheap.

And with record sales and earnings expected, shares should surely be back near 52-week highs around $55.50. 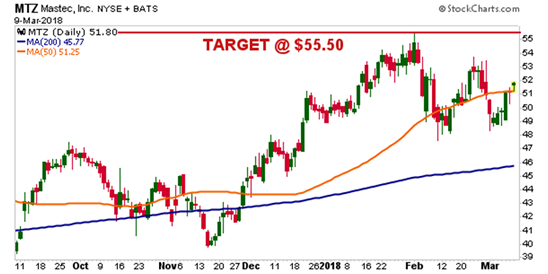 And while buying MTZ and waiting for the return to highs would be smart, I’ve got something even better. Using my low-risk options strategy, that small 7.1% move would be enough to generate an 18.8% gain — nearly triple the size of the stock’s move — by July.

Sounds crazy, right? It isn’t — Wall Street uses the same strategy every day. If this still sounds risky to you, maybe because you’re new to options trading, know that this trade breaks even if MTZ hits $54. That’s just 4.2% above recent prices, a move that seems almost inevitable given the company’s current trajectory.

How You Can Get In On This Trade
It wouldn’t be fair to my premium Profit Amplifier subscribers to reveal the specifics of this options trade in this article. But my proven strategy could be just what you need to make more on your trades than you thought possible.

While the rest of the crowd is simply buying stocks and hoping for the best, my subscribers and I have spent years “raiding” the market with our simple options trades, taking more than our fair share of gains.

I’m talking about returns of 31%, 35%, and more — all in a matter of weeks rather than months or years. In fact, we recently closed a trade on Take-Two Interactive (Nasdaq: TTWO) for a clean 38.9% in just over four weeks.

Bottom line, my stock market raiding technique is the best way to increase your returns while preserving capital and reducing risk. Of course, that’s only if it’s done correctly.