I’m Not Worried About This Market. Here’s Why…

Nearly everyone is anxious…

There’s talk of a global recession, much of the U.S. government remains closed for business, China’s economy is looking wobbly, and then there’s the ongoing trade war with that country.

Not to mention slowing sales growth from notable companies like Apple (Nasdaq: AAPL) and American Airlines (Nasdaq: AAL). And disappointing holiday sales that have crushed the share prices of many retailers, notably Macy’s (NYSE: M), which is down about 24% since January 9.

The latest wall of worry for the market and the economy is that this earnings season is expected to be slower than previous quarters. Now, keep in mind that the last three quarters have seen earnings growth of more than 24%. That’s a high standard to beat. To give you an idea of what sort of bar has been set, just look at last quarter’s performance. In the third quarter of 2018, corporate earnings grew by a massive 25.9% over the year-earlier quarter, the strongest such growth in eight years.

But expectations for fourth-quarter earnings are much less lofty, as analysts steadily drop their estimates. As recently as September, analysts expected earnings to grow by 17%, but that number has been knocked down to 11.4%.

In other words, there seems to be a lot of fuss in the financial media about earnings growing only by low double-digits. If companies in the S&P 500 grow earnings by 11.4%, it will market the fifth straight quarter of double-digit growth for the nation’s largest companies.

Here’s what earnings have looked like over the last three years: 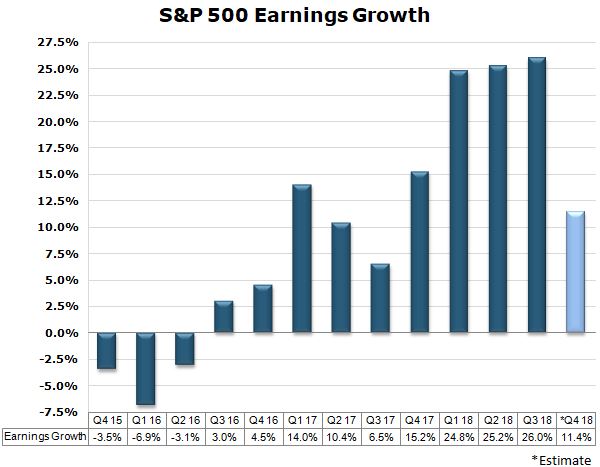 But while many investors and analysts are fretting about this earnings season, the market and the economy… I am not.

What, Me Worry??
In fact, I’ve put more personal money to work (in equities) in the last two weeks than I did in all of 2018. Granted, I’m not saying that what I do with my money is what you should do with yours. But as I’ve been telling my Top Stock Advisor readers recently, the great thing about a market “re-pricing” is that opportunities to invest in wonderful companies become more readily available. And that’s exactly why I’ve been putting my money to work.

The market pullback has actually provided an opportunity for two of our top five longest-tenured holdings in Top Stock Advisor to once again attain “Buy” status. And many other positions in our portfolio are looking like good values.

Take Constellation Brands (NYSE: STZ), for example. Shares of the company have slid — along with the overall market — as much as 30% since October. But nothing has fundamentally changed with the business…

When the beverage company reported earnings on January 9, we learned that the it generated more than $1.9 billion in revenue during the third fiscal quarter, a 9.5% increase over the year-earlier period. Operating income climbed 17% year over year.

However, net income did fall in the period to $303 million, compared with $493 million for the same period a year ago. But the decline stemmed primarily from its investment in cannabis firm Canopy Growth Company (NYSE: CGC), which could end up being a major growth opportunity.

#-ad_banner-#Since that initial investment, unrealized gains have topped $1 billion, but recent swings in the share price of CGC caused Constellation Brands to record a noncash charge of $164 million for the quarter.

During the earnings call, management did lower earnings-per-share (EPS) guidance for fiscal 2019, ending in late February. Constellation now expects EPS to be in the range of $9.20 to $9.30 per share, down from previous guidance of $9.60 to $9.75. This is mainly due to increased interest expenses related to funding the Canopy Growth purchase, as well as headwinds in its wine and spirits segment.

The lowered guidance caused shares of STZ to fall nearly 13%. However, shares have been making up that loss recently.

But while most investors keyed in on the lowered guidance and its investment in the Canopy Growth, they overlooked what’s really going on with the company.

The firm’s core beer business continues to outperform the U.S. beer market by a wide double-digit margin. Its beer segment grew sales by 16%, driven by the Corona and Modelo brand families.

Constellation Brands has grown comparable EPS at a compounded annual growth rate of nearly 20% over the past three years. The shareholder-friendly firm plans to return approximately $4.5 billion to investors over the next three years in the form of dividends and share repurchases. Its cash generation profile continues to be strong, as it is expected to produce more than $2 billion of operating cash flow annually.

Now’s Your Chance
​Keep in mind, this is just one example. The point is, the recent selloff provides a great opportunity to either add to your position in stocks like Constellation Brands or start a new one.

As I told my readers recently: “At Top Stock Advisor, our investment timeframe is much longer than one day, one week, or one month. Getting caught up in the daily market chatter can not only make your blood pressure rise, but it can lead you to exit a position prematurely.”

The same holds true for recognizing opportunities. In my view, the overly negative mood of the market is causing investors to miss out on the bright side — that we have a chance to pick up shares of great companies like Constellation at great prices.

That also makes right now a great time to check out my report of top picks for 2019. Each year, we spend months researching what we think will be the top stocks for the coming year. And over time, we’ve learned that the top picks year after year can be found with a simple set of principles. That’s why we’ve beaten the market again and again, with average gains of 39%.

While nothing is certain, we’re convinced — based on our cumulative decades of experience and expertise — that the picks in this year’s report are your best bet for building wealth in 2019 and beyond. And I’d like to share it, with absolutely no risk to you. Follow this link to learn more. You learn more about my report right here.