Why “Value” Investing Is Still Worth It…

They say that the market can stay irrational longer than you can stay solvent. That quip is widely attributed to famous economist John Maynard Keynes, who was nearly wiped out in the 1920s with leveraged foreign currency trades that went the wrong way.

A great many investors have learned this lesson the hard way, ruined not necessarily because they were wrong and the market was right, but because they ran out of cash before the market corrected its mistake.

This often happens within asset bubbles. Prices may be overinflated, yet they continue to rise. Those gains lure more buyers, who propel prices even higher, which leads to even more rampant speculation. Much like a pyramid scheme, successful investing in such conditions only requires one fool to find an even bigger fool willing to pay a higher price.

That’s the nature of momentum investing — it works until it stops working. And then it gets ugly. But going against the herd with short sales carries its own risks. As Mr. Keynes found out, you can run out of money long before the bubble finally pops.

But it’s the other half of the equation that I want to talk about today.

When “Value” Investing Pays Off…

The market is driven by fear as well as greed. So it can be equally irrational to the downside. We’ve all seen $50 stocks suddenly cut in half to $25 on flimsy (often short-term) reasons. So we buy, waiting for the stock to bounce. Only, the market is oftentimes in no hurry to admit that it erred.

So we wait. And wait.

#-ad_banner-#Being a contrarian value investor requires patience. And as I explained in this piece, that’s especially true in this market.

Sometimes, a new High-Yield Investing reader may expect for recommendations to dart higher almost immediately. And sometimes they do. For example, I added shares of CoreSite Realty (NYSE: COR) to the High-Yield Investing portfolio in the April issue near $104. Just eight weeks later, it was sitting at a new 52-week high above $120.

But dividend investing isn’t always synonymous with speedy gains. In fact, it has a lot more in common with value investing than most investors might initially think.

High yields are often the result of companies facing a few obstacles. And it may take them a while to work through their issues and win back investor support. Even when progress is being made, though, the market is often begrudging to acknowledge it.

Fortunately, when other investors won’t give a stock proper credit, a private equity firm or another suitor sometimes will — with a buyout offer. We could be looking at that scenario for one of our holdings in High-Yield Investing…
According to reports, aircraft leasing company Aircastle (NYSE: AYR) has decided to “explore strategic alternatives.” That’s corporatespeak for putting the business up for sale.

I doubt many people have heard of this company before, so here’s a brief recap…

Aircastle owns a fleet of 268 aircraft that are leased to airlines in 47 countries. Those jets are earning a lofty rental income yield of 10.7% on their book value.

To be sure, the company had gone through a rough patch prior to when we added shares to the portfolio in 2014. But the company was also misunderstood — and more importantly, undervalued.

This was true when we added the stock at around $14 per share. I was also true when it spiked to around $20 and back down to $16. 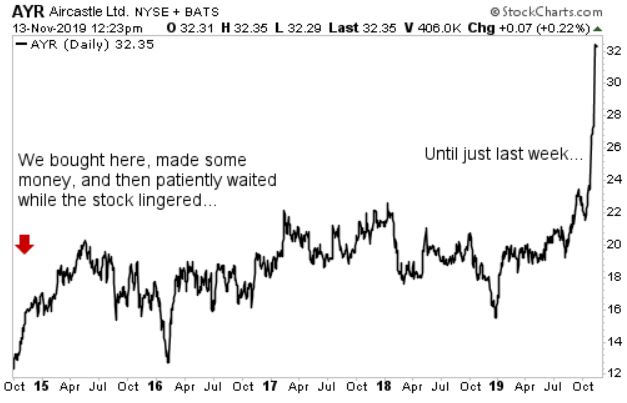 Well, it took a while, but an outside party finally took notice.

Now personally, I would rather see this cash-generating machine continue to stand on its own. But I wouldn’t complain about a profitable exit at the right price. And it looks like we’ll get it.

Aircastle has been in talks with “multiple” interested parties over the past couple weeks, and just struck a deal with Japan’s Marubeni and Mizuho Leasing (its largest shareholder). Marubeni has extended an offer of $2.4 billion, or $32 per share. That’s a healthy increase of nearly 40% from where the stock was trading a few weeks ago before news of a possible sale initially surfaced. And with an offer of $32 per share on the table, I recently sold our position for a gain of 125.9%.

The point is, while value investing can test your patience. These kinds of events are a good reminder of why it’s often rewarding to stay the course. And if you’re getting paid to wait, even better.

P.S. If the idea of getting paid to wait sounds intriguing to you, then I’ve got great news… Over at High-Yield Investing, we’re collecting yields as high as 11.2% AND earning strong capital gains. If you want to spend less time worrying about bills and more time doing the things you want, then I strongly encourage you to learn more right now.