Energy Stocks May Have Lagged, But This One Sure Hasn’t…

Any business can crank out hefty profits when conditions are favorable. The true test is how well it performs when the operating climate cools.

As a group, energy stocks underperformed during the bull market. That’s no secret, given the persistent weakness in oil prices. The price of benchmark West Texas Intermediate (WTIC) crude was once above $100 per barrel in 2014. After falling to the low $30s by 2016, prices have since only recovered to the mid-$60s.

You can see how this affected stocks in the sector, as represented by the SPDR Energy Select Sector ETF (NYSE: XLE), on the chart below. 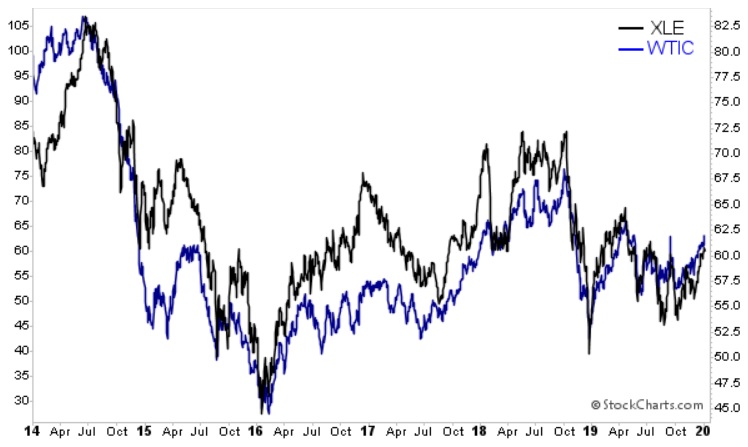 This is exactly what makes a company like Phillips 66 (NYSE: PSX) so special. We’re up more than 54% (with dividends reinvested) on the holding over at The Daily Paycheck. That not only blows the sector out of the water, but also the entire market. 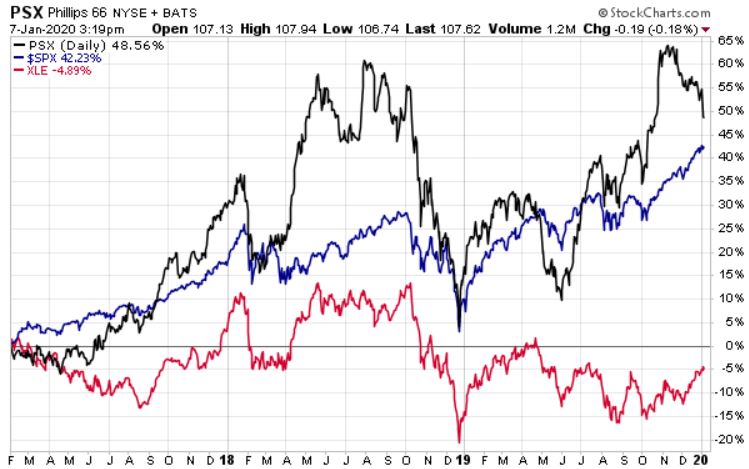 We just got a glimpse of the kind of operating expertise necessary to pull that kind of performance off – and why I think it’s still a “buy” today.

The company's core refining margins slipped to $11.18 per barrel last quarter, compared with $13.36 a year ago. With those facilities processing more than 2 million barrels per day, analysts were expecting the thinner margins to take a bite out of the bottom line.

Yet the company still managed to produce adjusted profits of $1.40 billion, a modest year-over-year increase.

That's a testament to the firm's diverse revenue stream. While refining profits have softened a bit, the midstream segment (which encompasses 21,000 miles of oil, gas and refined products pipelines) delivered a 4% increase to help pick up the slack. The chemicals division held its own, and the marketing group posted a healthy 40% increase.

With pinched industry refining margins, the market was bracing for a 16% sequential decline in third-quarter earnings at Phillips 66. But these multiple income streams helped the resilient company eke out a slight increase.

Keep in mind, prices for crude oil feedstocks and finished products can vary widely from region to region. Over the past 12 months, margins at facilities on the Atlantic Coast have stayed level. Those on the West Coast have actually increased. But spreads have narrowed in the central part of the country, where margins have been squeezed to $16 per barrel. That's half of what the company was earning at the end of 2018.

The biggest wild card for 2020 was the capital expenditure (CapEx) budget, which has a direct impact on the available cash left to return to stockholders.

That question has just been answered. Phillips 66 has set aside $3.3 billion for the upcoming fiscal year, $1.2 billion for maintenance and $2.1 billion for growth projects. This is about $1 billion more than last year's total budget. But management is quite disciplined with its checkbook and only invests in projects with attractive potential returns.

An Eye On The Future

It's safe to say that Phillips 66 has several ambitious projects on its plate. For starters, it's adding 2 million barrels of crude oil storage capacity to its terminal in Beaumont, Texas. This expansion, which will be completed in the first quarter, will bring the total to 16.8 million barrels.

The company is also finishing work on the new Gray Oak pipeline, which will carry 900,000 barrels of oil per day from the Permian and Eagle Ford production grounds to refineries near Houston. Elsewhere, the company is expanding natural gas fractionation capacity and contemplating a new petrochemical plant with the capacity to produce over 2 million tons of ethylene per year.

These are the kinds of expansions and new developments that will drive cash flow (and dividends) forward in 2020 and beyond. In the meantime, there will be plenty left on the table for us. The company has a longstanding policy of reinvesting 60% of cash flow back in the business and returning the remaining 40% to stockholders through dividends and buybacks.

PSX has been on a roll lately. But there's still room to run considering the company is trading at just 7.5 times annual cash flow. That's a sharp discount to its historical average of 11.7.

Many companies talk a good game. But actions always speak louder than words. Phillips 66 has increased dividends nine times since 2012, with distributions rising at a powerful 25% compounded annual growth rate (CAGR) over that time frame. We'll likely see another 10%+ increase announced in May 2020.

At the same time, heavy share repurchase investments have reduced the outstanding number of PSX shares by nearly one-third. Combined, the company has returned $24 billion to stockholders since 2012. This well-rounded energy and chemical giant remains a core long-term "Buy" for income seekers.

P.S. Want earn more income than you ever thought possible from dividend-paying stocks like PSX?

That's where my Daily Paycheck strategy comes in. We started this retirement plan as a low-risk investment way for investors looking to increase the size and frequency of their portfolio's payouts. And so far we've turned an initial $200,000 investment into more than $423,000 today — a total that continues to grow with each passing day thanks to the power of dividend reinvestment.

I want every investor to be able to have this simple yet powerful strategy working for them. And that's why I'll give you complete access to my entire portfolio, including a full slate of special reports to help get you started. All you have to do is go here to learn more.