In previous coverage, we’ve devoted some space to tell you a little about our latest investment predictions for 2022.

As you know, these come from our colleague Jimmy Butts and his research team over at Top Stock Advisor.

We’ve told you just how profitable some of these predictions have been in the past. We’ve also made the case for why it makes sense to carve out a little space in your portfolio to swing for the fences with high-upside picks like these.

But what we haven’t done yet is really dive into the specific predictions themselves.

So today, let’s do just that. I’m going to tell you about one of our predictions that’s pretty straightforward. In fact, if you’ve been following along with us, then you know we’ve seen it coming from a mile away, beginning last year.

If you haven’t guessed by now, I’m talking about inflation.

Our “Shocking” Prediction About Inflation (And Bonds) In 2022

So without further ado, here’s prediction #3:

Interest rates will surge in 2022, slaughtering bonds, and devastating millions of unprepared income investors. If the bond market crashes, that’s bad news for everyone — even if you don’t own bonds. There are few escape routes from the bond debacle that the average investor is familiar with. But we’ve found a handful of obscure lifelines that could make 2022 the most lucrative year of your life.

We made this call because we saw significant inflation coming our way from as far back as 2020. In last year’s report, we gave investors a few ideas on how to profit from soaring commodities, and those turned out well. But as 2021 came and went, we saw increased inflationary pressure.

The Federal Reserve seemed blind to the issue, calling it “transitory”. To the average person, that means temporary. It’ll pass in due time.

The Fed tried to weasel its way out by “clarifying” what it meant as that term became increasingly politicized. But finally, they eventually relented and admitted that the inflationary pressures were higher than anticipated.

Anybody who’s had to pay for gas (or groceries or building supplies, you name it) could have told you that.

(Random question… how many Fed members fill up their own gas tanks? I doubt we’ll see anyone in the media ask this.)

So in late 2021, the Fed began to change its tune. And now, beginning this year, it’s going to start to slowing the money-printing presses.

We’re already witnessing the effect that’s having on the stock market. In time, it’ll pass. But we also know that the pain will extend to the bond market…

When the easy money dries up, borrowers get squeezed, and interest rates rise. Econ 101.

We’ve already seen this happen with mortgage rates, for example.

Consider this: the bond market is at least two times the size of the stock market. And since rates began to fall from historic highs in 1981, they’ve been in a 40-year bull market ever since.

We’re talking about a massive sea change after an unprecedented easy-money era.

It’s anybody’s guess what happens next. But if the bond market crashes, that’s no bueno. You don’t have to be a bond guru to feel the pain, either. This market affects everyone from retirees to homebuyers to pension funds and local governments.

Here’s what Jimmy Butts told his premium subscribers about this prediction:

To get an idea of what could happen, one only needs to go back to the 1994 bond market crisis. After a period of historically low rates (to combat the 1991 recession), the Fed raised interest rates to combat inflation.

The increase in rates prompted a mass sell-off of bonds and debt funds worldwide. Bonds lost about $1.5 trillion in market value globally.

The yields on 30-year US Treasury Bonds jumped from around 6% to over 8%. While that may sound like a nice yield, we have to remember the prices and yields have an inverse relationship.

So as yields went up, prices tanked. And it doesn’t matter how big the yield is if your capital plummets.

Over the past several months, we’ve banged the drum on many of the usual suspects: gold, TIPS, commodities, etc. All are viable options for investors who want to protect against inflation – and potentially profit.

But in our latest investment predictions report, we told investors about a unique way they can short Treasury Bonds. 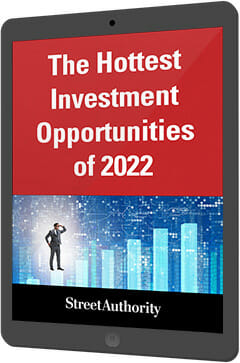 Remember: If bond prices fall (and yields go up), then you make money.

Now, shorting may sound like it’s risky or complex, but there are exchange-traded funds (ETFs) that do all the work for you. You simply buy these funds, which gives you short exposure to long-dated Treasuries.

There are a few choices out there if you’re interested in researching this on your own. But please be aware that these things can be designed in some rather funky ways that don’t make them suitable for long-term trades.

But there are two ETFs that we do like for this trade that we name in this year’s report. As a potential bonus, they are leveraged, which means they will move even more dramatically than the underlying market. They carry their own risks, of course, but for the right investor who’s looking to profit from a dramatic decline in the bond market, we think they could be worth it.

To get more details on this and the rest of the predictions in this year’s report, go here now.