My Plan To Profit From Disruptive Innovation In The Brokerage Industry…

It seems like a lifetime ago. I found myself in the office of Morgan Keegan with a shiny leather briefcase and a fresh copy of the Wall Street Journal.

That’s when the regional manager introduced me as the firm’s newest financial advisor. I was shown to my new office, given a quick tutorial on the account management software, and was politely told to start gathering assets and making trades.

I was still settling in and admiring the view from the 14th floor when a voice started blabbering from a speaker on the desk. That’s the “Squawk Box”, my neighbor told me, you’ll get used to it. I soon learned this intercom system was a common fixture in brokerage houses and investment banks allowing analysts to disseminate information to employees out in the field.

That was another world back then — long before the introduction of digital messaging systems like Slack.

While some of the senior brokers tuned in frequently to hear economic commentary and stock ratings upgrades, I was more comfortable doing my own research than being spoon-fed talking points to share with clients. This was an exciting time. Sites like Yahoo Finance had launched a couple of years before, offering up quarterly reports, press releases, stock charts, and other such information online.

Of course, if we could utilize this valuable content to identify promising securities, then so could potential clients. That’s not to say our experience and advice held no value. But it became harder and harder to justify a $100 commission for buying a block of Wal-Mart shares when a retail investor could place the exact same trade online for just $10.

It wasn’t meant to last. Many investors (particularly the do-it-yourself set) were willing to forgo personalized advice in exchange for thousands of dollars in cost savings each year. Nobody wanted to admit it, but the discount online brokers were poaching customers left and right. The writing was on the wall – adapt or become obsolete.

That’s the way of all business. It wasn’t long before the internet upended the entire wealth management industry. Seeing a downhill slide in commission rates, advisors began steering clients away from transaction-based accounts toward advisory platforms with fixed (and often negotiable) annual fees.

Once considered a novelty or a fad, it quickly became obvious that online trading was here to stay. That transition ushered in a prolonged wave of consolidation. Some of the mergers worked brilliantly, while others flopped (often because of radically different corporate cultures). Morgan Keegan fell into the hands of Raymond James. PaineWebber was dealt to Swiss Bank UBS. Even the mighty Merrill Lynch was eventually absorbed.

A Revolution In The Brokerage Industry

Flash forward a couple of decades, and the hunters have since become the prey. And this time, the smartphone has become the device of choice, supplanting the desktop computer.

Ever since mobile phone trading apps came on the scene offering commission-free trades with no account minimums, life has been difficult for established players like e*Trade. Aimed primarily at Millennials, these new trading platforms lack fundamental research, charting tools, and other such bells and whistles. But they have attracted millions of users who are perfectly fine with no-frills if it also means no fees.

The simple act of placing a trade has become a commoditized service. So when one company undercut the prevailing price, its rivals had no choice but to respond. Standard commission rates gradually dropped from $8.95 to $6.95 to $4.95 per trade.

So the events of October 1, 2019, were inevitable. That’s the day that Schwab (NYSE: SCHW) took this price war to another level, announcing plans to eliminate commissions altogether. It was truly a shot heard ‘round the industry. Less than 24 hours later, TD Ameritrade said it would drop commissions, too. Shortly after, e*Trade caved and agreed to match its competitors with $0.00 trades. You can see what happened to their respective stock prices once the news broke… 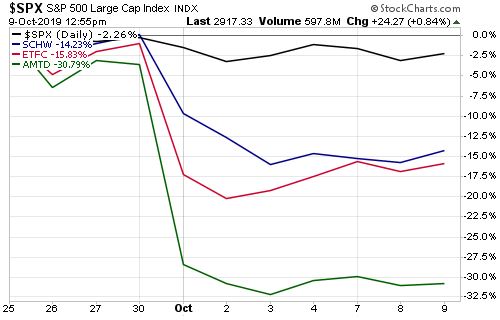 Don’t feel too bad for these guys. Commissions only accounted for about 5% of Schwab’s overall revenues. These companies rake in far more money from margin loans and net interest earned on clients’ idle cash. And these ancillary revenue streams remain quite profitable. Morgan Stanley clearly thinks so, having sunk $13 billion into its acquisition of e*Trade, which added five million accounts to the roster.

As I always point out to readers of my premium Takeover Trader service, it’s often easier (and more cost-effective) to buy out a rival than try to win over their customers one at a time.

Today, this feeding frenzy is entering phase two. So who might be next?

How I’m Playing This Trend…

I’m watching an upstart fintech company catering to a demographic that has long been overlooked by blue-blood Wall Street institutions. Having lived in this world, I can attest that many established brokers won’t even meet with a prospective new client unless they have at least six figures to invest. Anything less just isn’t worth their time. They don’t feed on crumbs.

But this disruptive company has taken a different approach. And right now, investors can scoop up shares for less than where the business was valued in the final round of fundraising before it even went public. That means private equity backers paid more pre-IPO than you or I would today. What’s more, I think this company’s co-founders (who control 65% of the stock’s voting rights) might be amendable to the idea of partnering up. And if it does, then any financial improvement should be recognized by Wall Street — and investors who buy in now could make out very well.

This is just one of a wave of potential deals I see happening in the coming months — and investors who get in early stand to make huge gains, practically overnight…

We’ve already bagged several triple-digit winners since launching Takeover Trader. But that could be nothing compared to what we’re about to see… And that’s why my team and I have produced a brand-new research report dedicated to this new tidal wave of deals, targeting three key sectors.

I encourage you to check it out — because sometimes all it takes is the slightest whiff of a rumor to send a stock soaring, making it too late for investors who didn’t bite early. Go here for more details.