A Surprising Way To Profit From McDonald’s Biggest Problem

Whether you enjoy fast-food or not, there’s something interesting going on in the industry.

#-ad_banner-#It’s so interesting in fact that I did a deep dive and found a great way to profit from the changing dynamics. If I’m right, then savvy investors stand to pocket some nice gains from this opportunity.

As you may have recently heard, effective March 1, McDonald’s (NYSE: MCD) CEO Don Thompson will resign from the fast-food giant, which had been languishing for some time under his leadership. The straw that broke the camel’s back appears to be McDonald’s recently reported drop in same-store sales, the first since 2002.

Shares of the storied company have fared poorly — losing about 3% in the past year, greatly underperforming the S&P 500, which is up 13.9% in the same time period.

But this poor performance isn’t new.

For the past five years, MCD shares are up 51.6%… still a pretty paltry showing given the market’s 94% advance in the same period.

Many market pundits are faulting McDonald’s soon to be ex-CEO for the poor performance. While there were likely some missteps, I don’t think the blame should fall squarely on him. There’s something much larger going on here.

I’d point the blame to the record high price of beef. Just look at this table I put together.

The 2014 price was for April, and prices have moved higher since. More than just to hone in on the exact price for beef, which can actually be relatively hard to track, the point here is to show that prices overall are dramatically higher, nearly by a third.

But let’s take this a step further. I used a little informed guesswork to take apart the costs of a Quarter Pounder to illustrate how the higher price of beef pressures on profit margins, regardless of what the CEO is up to.

At the base price, the Quarter Pounder’s profitability fits comfortably into the McDonald’s playbook, with a 20% margin. But a 31.2% increase in cost, even if applied to only the beef, decreases the profit per unit by 32 cents, cutting its margin to 12.5%.

Though there’s not much that McDonald’s can do other than stomaching the higher costs, there is a way to play this trend. I wouldn’t go so far as to short McDonalds. Instead, I’m looking to buy shares of a company that benefits from increasing beef prices.

Cattle prices are at all-time highs, even as input costs are falling, and this company has been benefiting from the changing economics of the industry. Even more, I think it has the potential to more than double the market’s historical return this year.

Just take a look back at the stock as beef prices jumped higher.

McDonald’s Stock Performance Has Been Lackluster 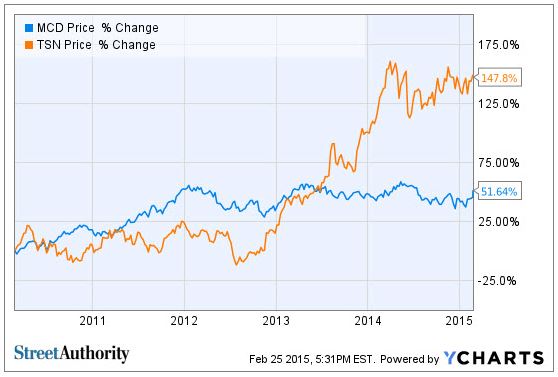 Shares rallied 147.8% return versus the unimpressive 51.6% posted by shares of McDonald’s.

Since I normally tell my Game-Changing Stocks readers about trends and cutting-edge companies that most regular investors likely haven’t heard of, I normally don’t like to give away my picks for free. But since this opportunity is timely — and in this case, it’s a company many of you are probably familiar with, I’ll let you have this one.

The company that I’m recommending to play this trend is Tyson (NYSE: TSN).

Now you might think of Tyson as a chicken company. After all, it slaughters 41 million birds every week. But it also processes 135,000 head of cattle every seven days. At an average weight of 1,600 pounds, these cattle outweigh the chickens by more than 50 million pounds each week. Think of Tyson as a protein company that sells not only chickens and cattle but also pork and processed foods. Here are its results from the past four years:

Protein prices tend to mirror each other. When beef prices rise, chicken and pork tend to go up, too. After all, there really aren’t a lot of ways to invest directly in beef, so this is one of my favorite ways to profit from the continued rise in beef prices.

Holding Tyson for 12 months might bring in exceptional returns, but holding it for the long term is, in my mind, where the money is. During the past five and 10 years, these shares have done some great things, and over their lifetime they’ve absolutely embarrassed the market (37,500% to 2,140%).

Finding companies like Tyson that benefit from ever-changing economic trends is my specialty. I regularly feature opportunities like this (including many that go completely under the radar to most investors) in my premium advisory, Game-Changing Stocks.

And while I see significant upside in shares of Tyson, there’s another opportunity that I think has even more potential to rake in profits for early investors, and has already paid of huge for my subscribers. In fact, I actually prepared a brand-new research video outlining this opportunity. It covers a handful of little-known Apple suppliers that I believe have triple-digit gain potential — and they’ve already crushed the market. Visit this link to learn more.