In 1803, saddled with a pile of debt and a looming war with England, France was in desperate need of cash. So Napoleon took the same course of action that many publicly traded companies do today: asset liquidation.

Thomas Jefferson’s emissaries to France struck an incredible bargain. The ensuing Louisiana Purchase was sealed for $15 million, or just 3 cents per acre. They acquired a territory that stretched from the Gulf Coast to Canada, essentially doubling the size of the fledgling United States.

France didn’t know it, but Jefferson was willing to pay $10 million just for the city of New Orleans. Control of the strategic port secured navigation and trade along the Mississippi River, which is what he was really after.

For half a century, this would be the cheapest and most transformative land grab in the nation’s history.

But it was outdone in 1867, when Russia ceded what would later become the state of Alaska for $7.2 million. (Russia was a motivated seller that also feared war with England at the time.) This purchase netted more than twice the land area of Texas for just 2 cents an acre.

That’s an amazing deal — even before you consider the millions of ounces of gold or billions of barrels of oil that were subsequently unearthed.

A lot has changed since then, but one thing hasn’t: Real estate is still in fashion.

The Oldest Asset In The World

Scarce resources are typically associated with fungible commodities such as oil or metals. But they’re not exactly making any more land, yet the world’s population is growing by 200,000 people (births minus deaths) each day.

That’s over a million new people a week crowding into a fixed amount of space to live, work and shop — placing upward pressure on land, housing, office parks, and retail strip centers.

That’s exactly why forward-looking investors are placing big bets on land and buildings.

We tend to associate ultra-rich business tycoons with hard assets like steel or oil, but a disproportionate number of the world’s billionaires have invested the bulk of their wealth in real estate.

Ted Turner owns 15 sprawling ranches from Oklahoma to Montana. This collection spans nearly 2 million acres, making the media mogul the nation’s second largest private landowner. Turner’s explanation is simple: “I never like to buy anything except land. It’s the only thing that lasts.”

Telecom mogul John Malone (a net worth of $9 billion) is the largest private landowner in America. In 2011, he scooped up 1.2 million acres of timberland in Maine and surpassed Ted Turner as the largest private landowner in the U.S. He also owns ranches in Wyoming, New Mexico, and Colorado. All told, he now owns more than 2.2 million acres, more than twice the size of Rhode Island.

And Sam Zell (net worth of $4.7 billion) made a fortune by investing in commercial office properties as well as housing in China, shopping malls in Brazil and the Waldorf Astoria Chicago hotel. (He’s also considered the pioneer of the REIT, which we’ll get to in a second…)

The point is real estate can be a sound, durable investment — particularly those looking for high, steady income. Not to mention it’s a great way to protect against the ravages of inflation. And its low correlation to equities can provide some buoyancy when the economy deteriorates and stocks are sinking.

A Way To Own Real Estate — For The Rest Of Us

Now here’s the thing… Most of us don’t have the bankroll to buy an office tower, an apartment complex, or a retail shopping center. But you do the next best thing and own a piece of them…

Readers of my High-Yield Investing advisory are very familiar with these investments.

In short, REITs are companies structured in a way to maximize income for investors. They raise money and buy things like apartment buildings, commercial offices, timberland, or other assets. Then any income generated by these assets is tax-free as long as 90% of it is passed along to shareholders.

Because of their unique structure, REITs are some of the highest-yielding investments on the market. And that’s why they have a prominent place in my High-Yield Investing portfolio.

A longtime staple of our premium portfolio, Realty Income acquired 911 properties last year, investing a record $6.4 billion. Those figures don’t even include the transformational merger with Vereit, which was finalized in November — effectively doubling this real estate empire.

Combined, Realty Income now owns 11,136 global properties that stand to generate $2.5 billion in contractual annual rental income. About half of the tenant base is rated investment grade, and most are concentrated in the grocery, convenience store, fast-food, pharmacy, and gym/fitness center industries. Unlike most brick-and-mortar retailers, these groups are all relatively unaffected by e-commerce pressures. Key renters include 7-11, Wal-Mart, and Family Dollar.

Realty Income closed out the fiscal year with an occupancy rate of 98.5% and a collection rate of 99.5% on the contractual rent due across its portfolio (a perfect 100% among its movie theatre renters). Despite the lingering impact of the pandemic, the company managed to increase adjusted funds from operations (AFFO) by 6% for the year to $3.59 per share.

And it’s picking up right where it left off in 2022. Recently, the company unveiled plans to purchase the Encore Boston Harbor Casino resort for $1.7 billion through a sale-leaseback agreement. The former owner, Wynn Resorts (NYSE: WYNN), will now rent the property through a 30-year lease agreement.

This purchase is a bit out of character for Realty Income. But Wynn (a premier developer of high-end resorts) will only represent about 3.5% of the firm’s rental income. Boston has a vibrant gaming market, generating more than $2.5 billion in annual revenues and growth rates well above the national average. And it’s shielded from competition – the Encore holds one of only two casino operating permits statewide.

The cap rate on this transaction is listed at 5.9%. Based on the purchase price of $1.7 billion, that would imply an annual rent of approximately $100 million – with contractual yearly rate hikes of 1.75%. The purchase will be immediately accretive to earnings.

In the meantime, this reliable landlord just dished out its 620th consecutive monthly dividend distribution. 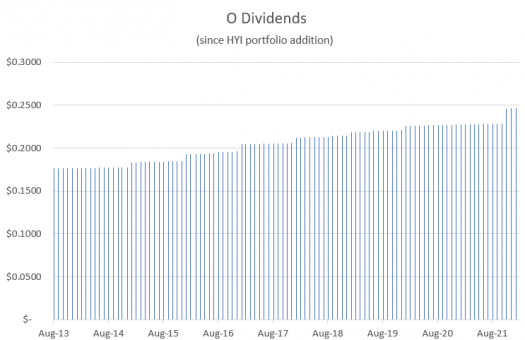 Realty Income remains a core portfolio anchor for income seekers. If you’ve always wanted to gain exposure to real estate and earn consistently high income, then REITs like Realty Income are the way to go.

But if you’re interested in getting the names and ticker symbols of my favorite picks, as well as the rest of my High-Yield Investing portfolio, then go here now.