How Investors Can Profit When Trouble Strikes At A Company…

When trouble strikes, you can often find excellent investing opportunities…

Just think back to the financial crisis in 2008-2009 and all the bargains that materialized. Heck, there were even opportunities outside of the stock market (like real estate). Granted, hindsight is always 20/20, but even the best companies in the world were trading at historically cheap discounts.

Of course, we saw the same thing play out back in March of 2020. When the Covid-19 pandemic hit, it looked like the world was coming to an end. But we only need to look back to history to realize that this was the perfect time to strike.

Of course, we took advantage of some of these opportunities over at my premium service, Capital Wealth Letter, and I hope you did, too.

Right now, unfortunately, it’s not as easy. The incredible run-up in the market produced a glut of stocks with fundamentals that simply didn’t support their sky-high valuations. So the market was due for a correction.

Now, before I go any further, I want to make something clear. I’m not saying you should plunge headfirst into the market anytime there’s a steep drop. Bear markets, like the one we’re in now, are normal and healthy in the long run. The trouble is, they sometimes end up lasting longer than we’d like…

But the war between Russia and Ukraine, and the ensuing run-up in oil prices that followed, provided a perfect example of the kind of opportunity I’m talking about. As I’ve mentioned several times, we took advantage by adding some energy names to our portfolio. But as I mentioned at the end of June, the window was closing — and that may indeed be the case now.

The point is, while I don’t know when the next crisis is going to hit (nobody does), you can be sure my subscribers and I will have some dry powder on hand when it does.

Whether you may know it or not, there’s a term for this style of investing. It’s called “crisis investing”. And it doesn’t have to happen when everything in the market (or world for that matter) is turning upside down, either.

You see, companies often experience their own crises. These often come in the form of scandals or other public relations disasters that prompt investors to dump shares, sending prices plummeting. Sometimes shares stay down for good reason, but other times shares only stay depressed because investors simply neglect fundamentally good companies after leaving them for dead.

If you can find a company that’s had its own internal, temporary crisis that’s caused its stock to tumble… It could provide you with the opportunity to swoop in and pick up shares at bargain prices — then you could make a fortune.

Sometimes that window of opportunity is slim. Take Wal-Mart (NYSE: WMT), for example. In 2012, shares of the retail behemoth suffered a small blow when news came out that it was involved in a bribery scandal. Shares tumbled roughly 9% in only three days.

Investors quickly realized that they overreacted. Wal-Mart wasn’t going anywhere. So they piled back in… but those that bought when others were fearful were rewarded for their contrarian view. Shares went on to rally 28% in only three months. And the rest, as they say, is history. 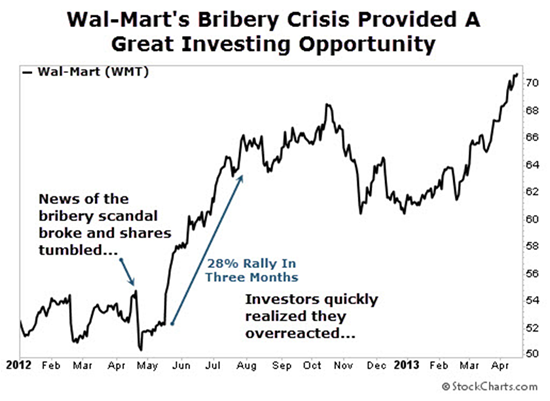 We’ve also witnessed how this sort of “crisis investing” can pay off with a company like American Express (NYSE: AXP). You may recall that American Express has actually survived a number of scandals throughout its history. The most prominent is probably the Salad Oil Swindle of 1963. (If you’re not familiar, look it up. I promise it’s a real thing.)

After the stock price had collapsed from the scandal, Warren Buffett stepped in and took a 5% stake in the company, on which he made a cool $20 million profit. (Then later regretted selling and bought more shares.)

When I first recommended shares of American Express back in 2016, the company wasn’t going through a scandal per se, but many investors considered it a crisis. American Express had lost its co-branding partnership with Costco (Nasdaq: COST). Investors fled the scene, essentially leaving American Express for dead. The stock tumbled 45%.

We stepped in and picked up shares for only about seven times cash earnings. That was a valuation the stock hadn’t seen since the 2008-2009 financial meltdown. Since we added this exceptional business to our portfolio, we’ve crushed the broader market…

There are numerous stories like this. The key to finding “crisis” winners is really pretty simple. When a negative event happens to a prominent stock, ask yourself… Is this still a great company? If the answer is yes, but the market is overreacting, buy and hold for the long haul.

Just think back to the 1987 savings and loan crisis, when the Dow dropped 22% in a single day… think you could have picked up some good deals then? Or how about the bear market of 1973-1974, when the market lost 45% in roughly 22 months — allowing Warren Buffett to purchase a stake in the Washington Post Company (NYSE: WPO), an investment that earned 100 times what he paid.

Keep this in mind when looking for “crisis” investments. By being “greedy” when others are “fearful,” you’ll be able to take advantage of these situations and be one step ahead of the crowd.

Editor’s Note: If you’re looking to be “greedy” when others are “fearful,” then this may be the ultimate opportunity…

I just released a brand new report covering the three best crypto investments available right now – and how you can profit. If you’ve been waiting for a second chance to get in on crypto, I believe now’s the time to cash in on crypto’s comeback.

Go here to get all the details now.