The Only 3 Auto Stocks Worth Buying Now

Record sales since the recession are starting to weigh on the automotive industry, signaling that the group may be entering a deep cyclical crisis. Prices on used cars and new trade-ins are plunging and new car sales are down nearly 8% this year.

It’s a price the industry is paying for its runaway success over last eight years. After jumping post-recession on “clash for clunkers” and low interest rates, the First Trust Nasdaq Global Auto ETF (Nasdaq: CARZ) is up just 7.6% over the last two years versus a gain of 26% in the S&P 500.

#-ad_banner-#And the pain may just be getting started as a record number of auto leases signed over the last several years expire, further depressing prices for new and used cars alike.

It could be an industry drought like we haven’t seen since the early 80s, when back-to-back economic recessions and foreign competition nearly destroyed U.S. carmakers.

There will be one segment of the market that could survive, and even thrive, in the evolving scenario. In fact, this segment may be about to book a revenue bonanza as the new cars sold over the last few years come back to the shop for repairs.

It’s the only segment of the industry I’ll touch right now and I’ve found three companies leading the space.

Just How Bad Could It Get For The Auto Industry?
Car sales in the United States rose for eight consecutive years through 2016, but the low-rate-driven frenzy is taking its toll on the industry. New car sales were down 7.7% in July compared with 2016. Not only are sales of cars and light trucks slumping but the massive volume since the recession is weighing on vehicle prices.

The average used car lost 17% of its value over the past year according to Black Book, an auto analytics company. Annual used car depreciation has been increasing every year, now nearly double the 9.5% annual depreciation rate measured in 2014. Luxury and subcompact cars lost more than 20% of their value over the last year.

In addition to trade-ins of new cars from record years depressing prices, more buyers are leasing their vehicles now. A record 4.5 million vehicles were leased in 2016. The average lease is for 36 months, meaning record volume in 2013 and 2014 is just now weighing on the market.

The pace of price depreciation means car owners are being forced underwater on their loans. The Federal Reserve reports that 14% of the 108 million auto loans outstanding have negative equity, owing more than the car is worth. Loan delinquencies of 90 days or more have jumped to 3.8% this year, up from 3.1% in 2014. KAR Auction Services estimates nearly two million vehicles will be repossessed this year, up from just 1.1 million at the height of the recession.

All this pain for the auto industry may be far from over. IHS Automotive finds car customers keep their new vehicle for an average 6.5 years before trading it in. That means we are just starting to see turnover on 2010 vehicle purchases. That leaves six and a half years of record new car sales that will hit the market over the coming years, depressing used and new car prices. 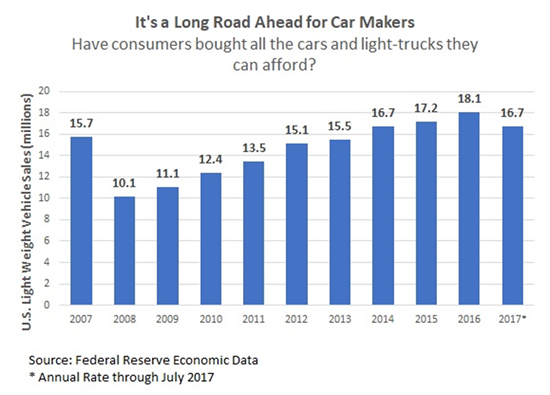 Repair Shops Could Fill Up As Dealer Lots Go Empty
Most of the industry will feel the pain, from manufacturers to dealers and rental agencies, as consumers pull back on new car purchases. The only relative safety may be in makers of repair parts and repair services. Many car owners will be forced to hold onto their cars longer due to negative equity. Other owners may just decide to keep their cars longer because they won’t be offered much on their trade-in.

Brake pads and tires start wearing out in four years on the average annual drive, alternators can go five years before needing changed and timing belts typically last around seven years. As the record number of new cars sold after the recession starts to age, parts dealers and repair shops could see a boost.

Monro Muffler Brake (Nasdaq: MNRO) owns a network of 1,118 car repair shops and 113 franchised locations in 27 states. Monro is ramping up to manage the coming wave of car repairs with its acquisitions of the Tires Now and McGee Auto Service & Tire over the last year. The acquisitions are expected to boost sales by $135 million annually, an increase of 13% over fiscal 2017 sales. Importantly, the acquisitions expand the company’s volume and distribution in tires, which are some of the most frequently replaced components on cars.

The company produced $116 million in free cash flow over the last four quarters, more than 7.4% of its market capitalization. Shares are down 18% over the last year on worries of a slowdown in the auto industry and now trade for just 1.5 times sales, a discount of 28% on the five-year average multiple of 2.1 times sales.

Dorman Products (Nasdaq: DORM) is the leading aftermarket supplier of dealer-exclusive parts, selling 51,000 unique parts to dealer repair shops nationwide. Dorman works closely with its dealer network to identify failure-prone original equipment parts and spends nearly $20 million annually in R&D. This focus on innovation has led to a jump in new products and sales. Products introduced over the last two years already account for 17% of sales, driving revenue at a 9% annual pace over the last three years.

Shares are down 8% over the last year even as sales increased and the operating margin improved by nearly 2% to 20% of revenue. The $2.3 billion company holds no long-term debt, carries $149 million in balance sheet cash and generates over $100 million annually in free cash flow.

Standard Motor Products (NYSE: SMP) books 89% of sales to the aftermarket segment with three-quarters from temperature control parts and the remainder in engine management parts. The company has established low-cost manufacturing in China and Eastern Europe to distribute throughout North America.

Shares are down 10% over the last year and trade for just 0.9 times trailing revenue. Sales are higher by 12% over the last year, driven by acquisitions and new product development. The $1.0 billion company aggressively returns cash to shareholders, returning an average of $24 million annually over the last three years through buybacks and the dividend.

Risks To Consider: Investor sentiment in the entire automotive industry may take a hit if car sales and prices continue to fall.

Action To Take: Position your portfolio in auto stocks that will benefit from people holding on to their cars longer and avoid those with the most to lose from the cyclical crisis.

Editor’s Note: Have you tried this stock market indicator? It’s more accurate than the MACD, and picks stocks that are, with 100%, mathematical certainty, going up every time. You can access it here.