This Contrarian Dollar Trade Could Net Us An Easy 26.7%

If you’ve been keeping score for the past six months or so, oil (in its various forms) and some other commodities (such as corn, gold, silver and soybeans) have all been in major bullish trends.

Now, I know it’s been a cold winter and crude oil inventories have come down, but oil prices have already jumped nearly 50% from their 2017 lows just eight months ago. And that winter period of high consumption is ending soon, giving way to low energy usage in the spring.

In sync with the booming stock market and rocketing crude market, metals and several “soft commodities” (those which are grown, not mined) have been spiking as well.

Gold and silver — typically defensive and protective commodities — tend to rally when markets are falling and fear is on the rise. Neither of those is true, yet gold prices are just $30 away from four-year highs. Corn and soybean prices are also at or near at least six-month highs. 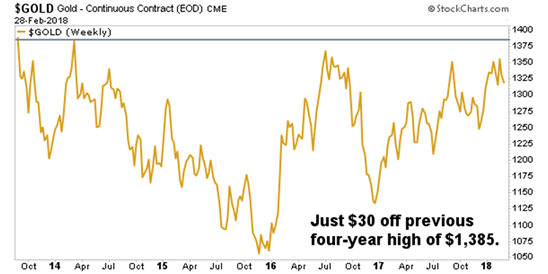 My point is that fundamentals are “good” but not exceptional for many of these commodities, and much of those bullish fundamentals have been “known factors” for some time. That means the bullish “sauce” is already baked in.

From my vantage point, the bigger motivator for all of these commodity prices has been the U.S. dollar (USD), which has been getting a slow flush down the proverbial toilet for the past year or so.

The dollar selloff has been the worst in 14 years, and I believe that’s about to change.

United States Versus The World
Even though President Trump wants a strong dollar, has publicly admitted he sees dollar strength, and has delivered what many consider to be exceptional economic growth (which typically causes a dollar rally) in his first year, the USD is the lowest it’s been since 2015. 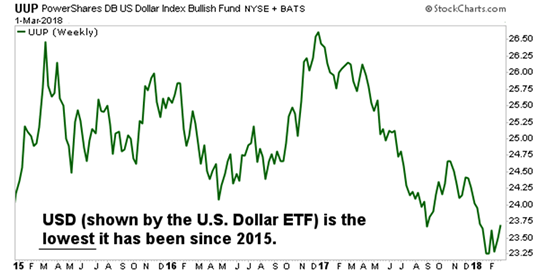 It’s an irony that may come as a shock considering just how well America appears to be doing economically. The explanation is simple: Other countries have simply been doing (perceptively) better than us. Europe’s economy has been recovering nicely at a little over 2% GDP, with Japan turning an economic corner and China continuing its dubious march upward.

But all these countries that have contributed to the USD’s demise are all facing real issues and all have used major government stimulus to get there. Government debt… spending… stimulus… quantitative easing… etc. These are all currency negatives.

#-ad_banner-#America, on the other hand, has reined in quantitative easing and recently appointed a hawkish (rate-raising) Fed chief to continue selling its inventory of bonds on the open market and return us to a stronger dollar position. Our recent tax cuts should further support GDP growth, as well (even though it is a form of government spending).

The way I see it, America is looking better than most of our trading partners, but the traders don’t seem to believe that… yet.

DBC: Playing The Reversal
I’m a believer in “reversion to the mean.” Put simply, I look for buying opportunities when everyone has gotten as bearish as they can be and have driven the price of something abnormally low. At that point, there’s nowhere else to go but up — a reversion back toward where things were before.

For a reversion to occur, there must be supporting fundamental or technical rationale — and I think we certainly have that here.

When this turnaround in the dollar comes, get ready for a reversal in many of these commodity prices, which are already testing their resistance levels. I think the reversal will be strongest in seasonal heating oil, which is the No. 1 holding in an exchange-traded fund (ETF) called PowerShares DB Commodity Index Tracking Fund (NYSE: DBC).

DBC is an easy-to-trade commodity-based ETF with great volume. Most important, we can buy and sell options on it. The ETF uses futures to gain exposure to 14 different commodities, with oil and gas holdings making up more than 52% of its total allocation, which means movement in those commodities will have the greatest impact on its price. Gold, soybeans, corn and others make up the balance.

Now, at the beginning of this week, I was originally targeting a move down to the $16.20 level, but it seems I was maybe a little too quick on this one. Tuesday’s comments by Fed Chair Jerome Powell sent the dollar rallying and commodities dropping, taking a little meat from our trade.

However, after taking a look at the new prices, I still see profit potential here.

Between a normalization of the pummeled USD and a seasonal decline in oil consumption, I believe the heavy weighting of those commodities will be enough to move shares back down to a level they were trading at just weeks ago. 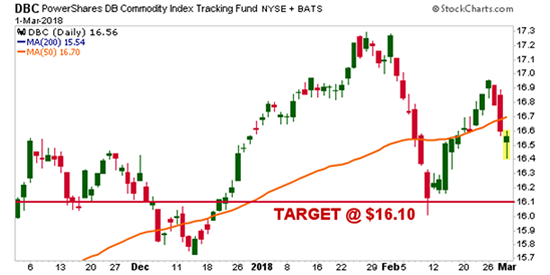 I’m not looking for a catastrophic correction by any stretch, just for DBC to move back down to the $16.10 level. And because this is typically a low-volatility ETF, that small 2.7% move would be enough to generate a 26.7% gain — 10x the size of the stock’s move — by July.

Sounds crazy right? It isn’t — Wall Street uses the same strategy every day. If this still sounds risky to you, maybe because you’re new to options trading, know that this trade breaks even if DBC hits $16.50. That’s just a few cents below recent prices, a move that seems almost inevitable given the company’s rapidly growing earnings potential.

How You Can Get In On This Trade
It wouldn’t be fair to my premium Profit Amplifier subscribers to reveal the specifics of this options trade in this article. But my proven strategy could be just what you need to make more on your trades than you thought possible.

While the rest of the crowd is simply buying stocks and hoping for the best, my subscribers and I have spent years “raiding” the market with our simple options trades, taking more than our fair share of gains.

I’m talking about returns of 31%, 35%, and more — all in a matter of weeks rather than months or years. In fact, we recently closed a trade on Take-Two Interactive (Nasdaq: TTWO) for a clean 38.9% in just over four weeks.

Bottom line, my stock market raiding technique is the best way to increase your returns while preserving capital and reducing risk. Of course, that’s only if it’s done correctly.